The Greatest Path and The Highest Achievement

In Srimad Bhagavatam, Sage Narada, while speaking to Sage Veda Vyasa about his earlier birth, says that he attained bhakti simply through association with sadhus. In fact, he says that the Lord Himself told him (then a little boy) that he (Narada) had found a shortcut to come to Him through sadhu seva (service of sadhus). 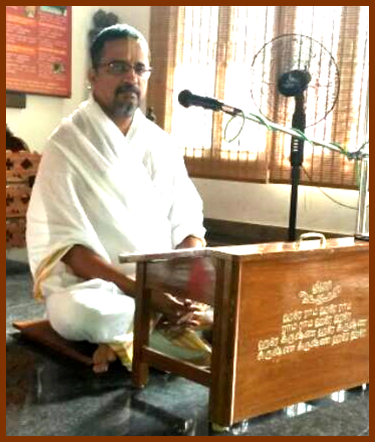 Why? Because in the other paths, you do not know if we will attain God or fall down. You may do dhyana for some days but stop after a while. You may be deeply devoted for a while, but permanent devotion cannot be vouchsafed. You may think you have deep vairagya (dispassion) for a while but you know not if it will remain forever. You may be pushed to a state where you would say “Oh, Sir! I was so full of bhakti in those days. But now it’s all gone!” or “Oh, how deeply I would get into dhyana before, but now it’s all gone!”

Why does this happen? Because in this case, you are depending on yourself and your efforts. On the contrary, when you hold the feet of a Mahatma tightly, he will pull you along with him to the shore!

The one who can show Bhagavan to His Bhakta is verily the Guru. So He leads that person to the Guru. Bhagavan thus prepares the jiva (soul) slowly and lifts him up gradually only through satsang and Guru’s grace (Guru krupa). So some come to a Mahatma early, some later. This is all the will of Bhagavan.

There are so many people whose lives have changed completely simply with Guru krupa. Vijaya Vittala Dasa was a great Mahan who has composed many songs and works, among them the famous song,”Sada enna hrudayadalli vaasa maado Sri Hare.” He was born in a very poor family and faced a lot of difficulty in life. Once he went to Kasi, and on the way he had to endure several abuses and insults. At Kasi, he had a vision of Sri Purandara Dasa, who showered His grace on him. After that, he was filled with devotion and began to sing the Lord’s glories, and people automatically began to respect and honor him. Vijaya Dasa thought, “While going to Kasi I only received abuses and insults but now on my way back from Kasi I receive honor. What have I earned in between? I have earned Guru krupa! Guru krupa has changed everything!”

In the world when you ask someone, “What have you achieved in your life?”, each person may give a different reply – of having earned much wealth, some high position, having settled all his children, earned the President award, etc. But the highest achievement that one attains in life is verily Guru krupa. That is truly the supreme. Greater than everything. Very special. Though one may understand this it gets obliterated from memory now and then, due to Maya. Only at the time of death when the life leaves the body will one realize what Guru krupa has done to him.