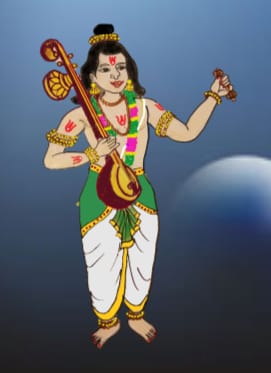 “Narayana! Narayana!” These words, heard in a slightly sing-song, lilting tone, brings to mind a chirpy yet mischievous image of Sage Narada walking in, strumming his inimitable tambura.

Sage Narada’s countenance contradicts our notion of a ‘sage’ who we commonly imagine to be one who is sedate, serious, and lost in deep meditation. Instead in Narada Maharishi’s personality, we find one who roams the three worlds without staying in one spot for long; someone who laughs often and goes from place to place carrying news, messages and advice; and furthermore, an impression of one who supposedly creates controversy and confusion wherever he goes.

He is often considered to be only a divine musician or a journalist; one who is entertaining enough to walk into the court of demons like Hiranyakashipu or Kamsa with the same aplomb and cheerful gait that he might have while entering the palace of Yudhishthira or Vasudeva. A helpful sage, maybe, but perhaps not one to be taken too seriously.

Yet when we consider, with love in our hearts, Sage Narada’s actual words and actions as found in our Puranas and Itihasas, a completely different personality is revealed. Not a talebearing traveling bard, but a wise, compassionate Guru who seeks out souls of all kinds and takes them, gently but unfailingly, to the Lotus Feet of His dearest Bhagavan.

Wherever devotees struggle, Narada Maharishi is there. When a deeply hurt Dhruva set out in earnest to see Bhagavan but without knowing how to, it was Narada Maharishi who went to his rescue. Pleased immensely by the determined child, he told him in detail where to go, what to do, and in fact, installed Bhagavan Himself in the child’s heart in a way that only a Guru can. Not only that, after he left to follow the sage’s instructions, Narada Maharishi himself went to the child’s dejected father and reassured him that his son would return safely and in great glory after having Bhagavan’s darshan. Is this not the Guru’s confidence that Bhagavan would definitely give His darshan to a disciple that he had taken to His lotus feet? Dhruva attained greatness purely due to the compassion of Sage Narada.

Where a Bhagavata is to be made, Narada Maharishi is there. Narada Maharishi initiated Prahlada into the Lord’s Name and instilled devotion in him even as an unborn child in his mother’s womb. This blessing turned Prahlada into the best of the Lord’s devotees! Prahlada himself acknowledged later to his classmates that it was only due to Sage Narada’s grace that he had developed devotion and dispassion.

A Guru showers his immense compassion equally on all. He/she does not differentiate between the so-called ‘good’ or ‘wicked’, ‘dharmic’ or ‘adharmic’. A Guru sees no differences, for, as far as he is concerned, everybody has to be taken to the Lord’s presence and made the recipient of the Lord’s grace. And a Guru does his work quietly, in a hidden manner. In fact, it is so hidden that we tend to focus only on the greatness of the disciple in attaining Bhagavan and often remain oblivious to the work of the Guru behind that highest and rare accomplishment, like in the case of Dhruva and even Prahlada.

It was Sage Narada who pointed out the whereabouts of Varaha Bhagavan to the demon Hiranyaksha, thus helping fulfill Hiranyaksha’s destiny of a sacred death at the hands of the Lord Himself. In the case of Kamsa, whose path was to attain Krishna was through ‘fear’, Sage Narada went out of his way to ensure that Kamsa stayed on his spiritual path and that his fear of Krishna continued to be fuelled even before Krishna was born. When the strong-hearted and truthful Vasudeva took his firstborn child to Kamsa to keep up his promise of giving all his children to Kamsa, even the wicked Kamsa was moved by Vasudeva’s dispassion and integrity. In a rare moment of viveka (discriminating right from wrong), Kamsa told Vasudeva to keep the child since it was only the eighth one that had been prophesied to be his nemesis. But this would have been a disastrous decision in Kamsa’s path towards Bhagavan. If one who was to attain Bhagavan through fear turned ‘good’, that soul had no hope of reaching the Lord. Moreover, this decision would have affected the very possibility of Bhagavan’s avatara itself! Enter Narada Maharishi, who went to Kamsa and convinced him that the Yadavas were ‘out to get him’, thus reinstating in Kamsa the ‘fear of Krishna’ that was his spiritual path.

“While other deities can confer joy and misery on a soul, sadhus know only to bless and bestow supreme happiness on every soul,” says Vasudeva to Narada Maharishi in Srimad Bhagavatam (11:2:5). Even when he curses, Narada Maharishi only blesses. When Nalakubera and Manigriva, the sons of Kubera, disturbed Sage Narada in an intoxicated state, he cursed them to become trees. But where? In the hallowed land of Gokula where the highest of devotees wish to be born as a blade of grass or as a stone (as they sing in numerous slokas and songs – Lord Brahma himself in Srimad Bhagavatam 10:13:34, Oothukkadu Venkatakavi in his song pullAi piravi taravEnDum…). These fallen sons of Kubera received that same highest blessing without even asking, simply through contact with the sadhu Narada Maharishi. They were born as trees in Gokula who witnessed the lovely leelas of Baby Krishna and were finally blessed by Krishna Himself!

Not only does Narada Maharishi guide devotees; he guides Bhagavan Himself! During Sri Krishna avatara, after Krishna performed all His leelas in Brindavan, it was Narada Maharishi who reminded Bhagavan of His pending duty towards a host of other people outside of Brindavan – the Yadavas, Pandavas, wicked kings like Kamsa, Jarasandha, Shishupala and others, Rukmini Devi and numerous princesses, and innumerable others – who were all awaiting their turn to be recipients of the Lord’s grace.

Sage Narada is the primary reason that we are even aware of the beautiful and simple path of Bhagavata Dharma that has been prescribed for this Kali Yuga, the current age. Sage Veda Vyasa –  the avatara purusha who divided the Vedas into four and wrote the majority of the Puranas as well as the Mahabharata, and is considered the Guru of Sanatana Dharma – was dejected and perplexed after looking into the future and seeing the fallen state of people in the Kali Yuga. As he sat wondering what could be done to save humanity, it was Narada Maharishi who came there and exhorted Sage Veda Vyasa to elaborate on the leelas of Bhagavan through the Srimad Bhagavata Mahapurana, which would be the refuge for people of Kali Yuga. Not only is Narada Maharishi compassionate towards us, those who are struggling to stay afloat in this tumultuous age, but it is he who brings solace and solutions to even the greatest of sages.

When the Kali Yuga began (about 5000 years ago), and spirituality/attainment of Bhagavan lost importance, it was Narada Maharishi who was moved by the degradation of bhakti (devotion), jnana (divine knowledge) and vairagya (dispassion). Realizing that it was Bhakti alone that could save us, he took an oath that he would establish Bhakti in every home and heart! He searched high and low for a solution to revive and revitalize Bhakti and finally uncovered the path of Bhagavata Dharma and the process of Srimad Bhagavata Saptaham.

True to his oath, Sage Narada continues to work tirelessly in the Kali Yuga. He himself came down to earth in the form of Saint Purandaradasa, to exhort everyone to sing the Names of the Lord and illuminate the devotional path of Nama sankirtan. Later, it was Sage Narada who gave the divine musical text of Swararnavam to the great saint Sri Thyagaraja, whose divine music inspires us even today towards devotion.

Even up until today, we can be assured that the compassionate Sage Narada is working hard and thinking of ways and means to pull us up, lift our minds towards Bhagavan and install bhakti in our hearts.

What a divine sage Narada Maharishi is. Where would we be without him? We say “Narayana! Narayana!” and mock him. But even that he takes joyously and says, “Aha you have the Lord’s Name on your lips! I now have an excuse to beg the Lord to shower His grace on you.”

nArAyaNam dadAti iti nAradah, say our scriptures – The word ‘Narada’ means ‘One who gives us Narayana.’ This is what a Guru is. This is what Narada Maharishi truly is.