Our best friend and worst enemy, the mind, always aims to outsmart us. The sooner we learn its double agent nature, the better, because when we realize who we are up against, we’ll progress faster. 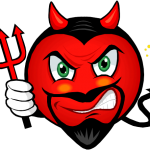 Say we resolve to stop a long time habit (for e.g., coffee addiction). It (mind) is the one that makes us take up the resolution. It provides the confidence, and the impetus, and makes us want to do it. But it also knows when to put the brakes. Slowly but surely, even to one who has a strong will power, it will find a way to beat the resolution that it initiated in the first place. Why? Because the very nature of the mind is to keep us enslaved, for that alone feeds its sustenance. Will a corrupt agent ever turn himself in?

To achieve its purpose, perhaps the mind too takes the approach of sAma, dhAna, bheda, dhanda.  Initially we start off with some enthusiasm, but soon enough that very mind will begin to employ its arsenals. First it tries to reconcile (sAma). “What’s the big deal with coffee?  You can start or stop it anytime. You are not really addicted.” Then comes dhAna (sacrifice): “Look! Caffeine is the problem. Here’s decaf! – tastes just as good, and it’s better for your health.” If that doesn’t work, then there’s bheda (threat): “See, you’ll have a headache if you stop this morning coffee. Is it really worth having a lousy start every day?”

By now, most of us would have said goodbye to the challenge. To the most resolute, finally, there is ‘dhanda’ (fight). We go through several days of battle resisting the temptation over and over again. Time will test our endurance and will power, and a very small fraction of survivors may seemingly pass the test.  Here again, they may not have realized that the mind has conveniently switched the game on us by enslaving us on a replacement addiction. “Look, here’s a new toy. It’s Touch screen, it’s Android and has got Angry Birds!” So, we are off chasing something else.  The mind is happy as long as it pulls the strings on us.

Even in spiritual progress, the mind does the same because of its nature.  When we chant the Divine Names, it may interest us in a resolution to chant sitting in one place for 30 minutes without distraction, and define that as progress. Soon enough, it switches sides and aims to break that challenge. Here comes the sAma, dhAna, bheda, dhanda for this. You know you can chant and write Nama as well; Working on Satsang related things while chanting is acceptable, ok?; Maybe changing tunes every 5 min will make it go faster?; If you don’t finish this 30 min, then be ready to face the consequences!

Such is the vacillating nature of the mind. While seemingly appearing to be beneficial, it can prove quite damaging unless a strong sense of discrimination (viveka) is applied to each passing thought in order to filtering out the harmful ones.