Vibhishana’s Surrender to the Lord

Lord Hanuman went to Lanka in search of Sita devi. There, after he met Sita devi, he allowed himself to be captured by Ravana’s army. In Ravana’s court, he was teased, troubled, and finally ordered to be killed. 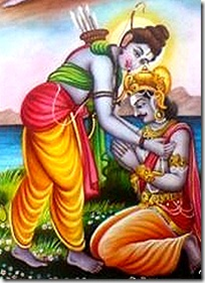 Vibhishana was Ravana’s younger brother. Although a rakshasa, he was righteous and a great devotee of Lord Rama. When he saw Hanuman, a messenger of Rama, being treated cruelly and about to be killed by Ravana, Vibhishana stood up for Hanuman.  He reminded his brother about how a messenger should be treated by a king, and especially that he should not be killed. Moreover, he advised Ravana to release Sita devi.

Ravana scoffed at Vibhishana, but changed his mind about killing Hanuman. Instead he set Hanuman’s tail on fire, which eventually led to the whole city of Lanka being burnt  down by Hanuman.

Later, as Rama’s army reached the other shore and was planning to cross the shore to Lanka, Vibhishana once again requested his brother to release Sita devi and warned him against fighting with Rama. But Ravana did not listen to Vibhishana as he was swollen with pride of his power and valor.

Vibhishana, now disgusted with Ravana’s obstinacy, and strengthened by the fact that his Lord Rama was very near, left his brother’s kingdom and went to take refuge in Sri Rama.

As Vibhishana and a few of his loyal rakshasas came flying across the sea to Rama’s camp, Sugreeva and other monkey warriors became suspicious. When Vibhishana introduced himself and asked to see Rama, they reported his arrival to Rama with immense doubt about his intentions. They told Rama that he was probably Ravana’s spy.

However, Rama knew Vibhishana’s heart. He asked every one of His advisors about what action He should take. Everybody told Him to send Vibhishana away, except Hanuman who took Vibhishana’s side.

Sri Rama was overjoyed and said that He would never refuse anyone who took refuge at His Feet. Saying so, He accepted Vibhishana’s complete surrender and showered His grace and compassion even on the rakshasa.