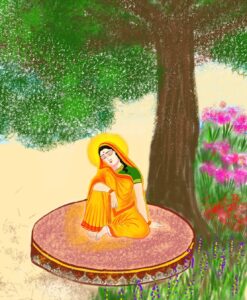 Sita Navami or Janaki Jayanthi, as is popularly known in Northern parts of Bharat, is celebrated in Vaikasa month, Shukla paksha Navami. It was on this day that the virtuous King Janaka found the divine girl baby in the earth when he was ploughing, in preparation for a yajna. Thus, on this day Bhoomi Devi (Mother Earth) is also worshipped. This year(2022) this fell on May 10.

Kirtans are the verbal expressions of Mahatmas’ experiences. Irrespective of the worldly language in which these are expressed it is known as samadhi bhasha. This single kirtan of Sri Swamiji would suffice to get a glimpse of Sita Mata’s matchless gunas.

“Have forbearance, compassion and tapas, all together taken a form in Ashokavana?”

Sri Swamiji then, very touchingly, goes on to observe and sing,
“In Thy matchless forbearance O Sita, even my dear Rama is only second to Thee!

“Oh, how did Thou spend ten months in Ashokavana amidst the demonesses?
O epitome of chastity, Rama’s Beloved! Wonderful, Wonderful, is Thy charitram!

“Thy amazing eyes never know any fault; Thy wondrous mind never considers any fault!
Even among all kinds of sacrifices (tyAga), what sacrifice is this! Is even the courageous Rama equal to Thee in this?

“Bowed down to by none other than the celebrated son of Anjana, You who have a devout chittam that is unwavering.
To Thee who jumped fearlessly into the fearful fire, I the ‘aparAdhi’ do take refuge.”

There is an interesting incident in the life of Sri Ramakrishna that is narrated in the book ‘How to live with God – in the company of Ramakrishna’.

One day as Sri Ramakrishna sat in the Panchavati in Dakshineshwar, a luminous female figure of exquisite grace appeared before him.  Her radiance lit up everything around her. Even as he wondered who this could be, a monkey crying out loud fell at her feet and rolled on the ground.  It then came to him in a flash that this was none other than Sita Devi. Sri Ramakrishna cried out “Mother!” and was about to fall at her feet when she passed into his body and merged into him.  Sri Ramakrishna lost consciousness. He had visions of Sita Devi many times.  He says that this was the only time that this vision was had with eyes wide open, and not while meditating.  He saw the trees, Ganga and all else around him.  He prayed to Mother Kali to make him like Sita Devi who was completely forgetful of her own body and had only one thought, ‘Where is Rama?’

Holy Mother Sri Sarada Devi in describing the sharpness of the Master’s vision said that he had seen Sita wearing a bangle with an unusual design, and had presented Sarada Devi with a similar bangle.

Click here to go back to the May 2022 newsletter page:
https://godivinity.org/newsletters/nama-dwaar-newsletter-may-2022/