The power of Nama is one that can perform even the most miraculous of wonders. As Sri Sri Muralidhara Swamiji has said, “Chanting the Divine Names loudly purifies the chanter, the listener and the very place where the chanting is done.” 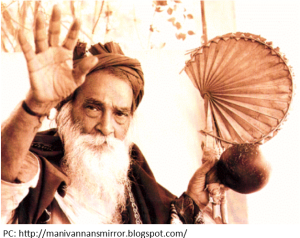 One such tale of the power of Nama concerns the spectacles of the great saint, Yogi Ramsuratkumar. One day, on his journey through India, he stopped at a small village called Tirukoilur, the location of Swami Gnanananda’s ‘Tapovanam. Through his village ran the Pennaiyar river, a gem-blue stream, sparkling like tinsel as it made its way downstream. Near this beautiful river was the samadhi of a Mahan called Ragottama Swami. One day, thousands of devotees were gathered there. The same day, a little boy, enchanted by the river magnificence, went to bathe in it but was ensnared by the strong current—he was trapped between two large rocks.

He frantically tried to loosen himself and screamed for help, and soon, the devotees from Tirukoilur noticed his plight. One by one they assembled on the riverbanks and tried to rescue the boy, but to no avail. Eventually, they gave up and took the problem to Swami Gnanananda, who told them to seek the help of a particular saint who was in the town (Yogi Ramsuratkumar).

Immediately, his devotees ran to Yogi Ramsuratkumar, describing the situation to him. After listening to them, he calmly strolled to the river, and walking along its banks, waved his fan, chanting “Sri Ram, Jaya Ram, Jaya Jaya Ram.” At once, to everyone’s delight, the two rocks shattered, and the boy was able to swim to safety.