By Sri Guruji’s immense grace, the second annual Puranava 2019 India Culture Fest organized by Global Organization for Divinity (G.O.D.) in the Houston area on March 23, drew hundreds of visitors from across Houston and Pearland on a lovely Saturday. Throughout the day, the event showcased India’s beautiful, inherently divine traditions through a variety of programs and exhibits. The event was held to commemorate the ninth anniversary of Houston Namadwaar, which is located in the Pearland/Manvel suburb of Houston. The event was conducted in the popular public space of the Pearland Town Center, a pavilion in a mall area in the heart of Pearland City.

All of them had praises for the immense contribution of the Indian/Asian community in general and that of Global Organization for Divinity specifically, to the vibrant, growing diversity of Pearland and Houston areas. Sri Poornimaji, in her keynote address, emphasized the true Indian culture represented in this event with divinity at the core of every activity, and how America and India share the common value of acceptance by integrating diverse cultures into their fabric.

The highlight of the event was the unique Chariot Parade (Rath Yatra) – a first for Pearland – where a large chariot carrying the deities of Sri Jagannath, Sri Balabhadra and Sri Subhadra was pulled in a procession around the Town Center Pavilion. The brand-new chariot was built specifically for this purpose by volunteers of Universal Shraddha Foundation who co-hosted this segment, with much of the material coming directly from Odisha, the state in India that is famous for its annual chariot festival in the city of Puri. The Jagannath Parivar blessed by Sri Swamiji also came all the way from Virginia to participate in this Rath Yatra.

The chariot parade, a gesture for universal harmony, was kicked off by children of G.O.D.’s “Gopa Kuteeram” Youth Program, who sang the Mahamantra Song composed by Sri Swamiji. This was a Song of Unity rendered in 16 different world languages. The chariot parade included folk and classical performances by different groups including a dance by Houston Kannada Vrinda, chenda melam folk percussion presentation by Panchari Arts, Tamil folk dance by Cypress Gramiya Kalai Kudumbam, a classical Odissi dance performance by Kalaangan School of Odissi, and a melodious classical Indian flute rendition Pandit Guru Parshuram Das. The parade concluded with reverberating Mahamantra Kirtan where lots of people from the crowd also joined.

Earlier in the day, a number of Youth Competitions were held – in Chess, ‘Samskruti’ Art based on Indian themes, Indian Classical Dance, Madhurageetham devotional music, and a Heritage Vocabulary Bee that encouraged children to learn the meanings of Sanskrit words used commonly in Indian culture and traditions. The competitions saw over 200 registrants from all over the Houston area. The competitions and awards were sponsored by Love to Share Foundation America (LTSFA).

Several local businesses also supported the event through sponsorships, gift cards and certificates for winners and volunteers. The event was almost entirely run by dedicated volunteers from around Houston along with GOD visitors from Virginia and Dallas.

Everyone was amazed at the event timings, the wonderful weather and overall happy ambiance during and after the event. Humble gratitude to Guru Maharaj, whose grace was evident throughout the event! 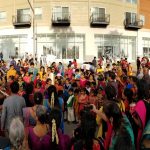 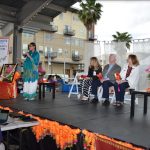 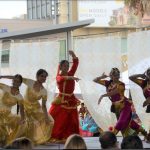 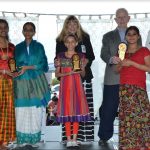 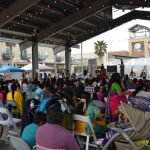 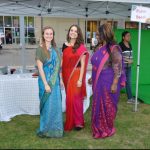 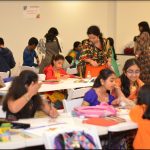 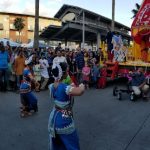