In the tamil Month of Chitirai, in the waxing cycle of moon (Shukla Paksha), the day on which Swathi star falls, marks the day when Sri Narasimha appeared from the pillar to make his Bhakta- Prahlada’s word come true.

This year, Narasimha Jayanthi fell on May 9 and the satsang devotees celebrated Narasimha Jayanthi with katha shravanam and the parayana of 7th Canto of Srimad Bhagavatam that marks Prahlada charitram at the residence of Anu and Shiva at Hopkinton MA on May 13th 2017.

The satsang began with Mahamantra kirtan. Following this, Sri Narayananji highlighted the importance of satsang, by narrating Ajamila Charitra and also gave a prologue to the 7th canto by narrating the Vritrasura charitram. As the parayana of each chapter of 7th canto was done, Sri Narayananji explained the story of Prahlada. For several parts of the story that contained Sri Prahlada Swami’s explanation of Hari Bhakti, the 9 steps of Bhakti, the descent of Sri Narasimha Bhagavan and prahlada stuti, all the devotees joined the parayana.

This was followed by Harathi, prayers and Mahamantra. About 20 devotees participated in the satsang. 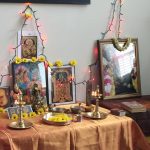 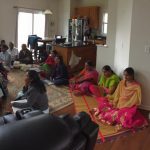