The Science of AND

Excerpts from a talk by Sri Ramanujamji, disciple of HH Maharanyam Sri Sri Muralidhara Swamiji, at the Students Mass Prayer held at Chennai, India in Jan 2019

Indian culture is that of ‘And’ not ‘Or’. Everywhere in the world, Indians are respected as a very intelligent community and as people who possess honesty, integrity, and who place emphasis on values.

Many of the world’s top companies, including Google, Microsoft, Adobe and until recently, even Pepsi, are headed by people from this land because we Indians truly understand what AND means.

‘Head OR heart’ is not how Indians think. We believe it is head AND heart. A sharp intellect AND the integrity, honesty, truth of the heart. That’s the reason why many financial functions in the world are actually managed by Indians. Because the world understands that we are honest, truthful, AND we mean business, AND we are hardworking. That’s what India stands for – AND.

In the same vein, “Science AND Spirituality” is the spirit of India. 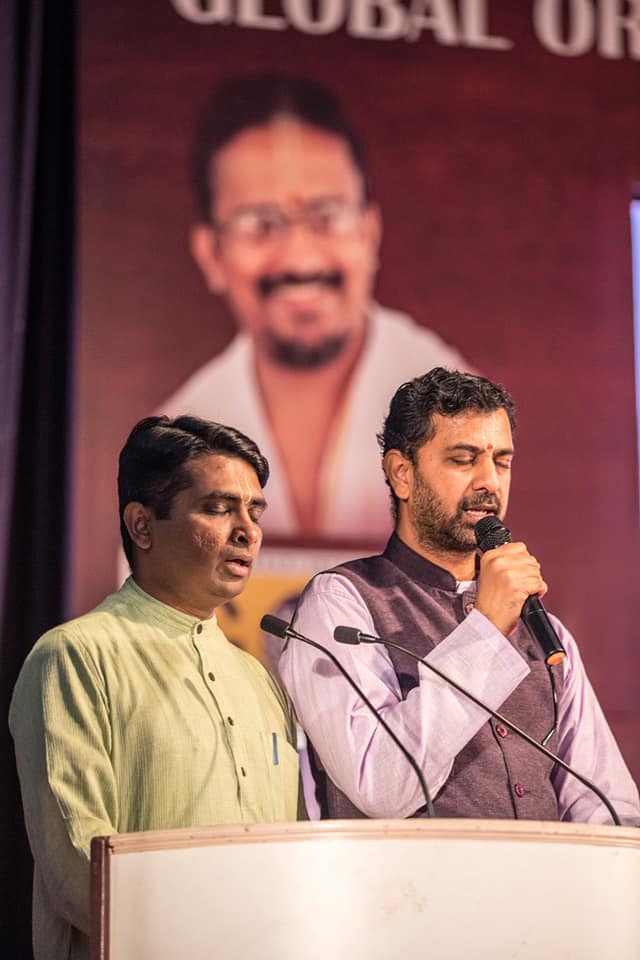 Once Sri Swamiji, our beloved Master, was asked, “India is a spiritual land. What science is there in India?”

Sri Swamiji replied, “You have studied engineering. What does science say about how the universe came into being? What created the universe?”

“Big bang theory. Science says that there was a huge explosion that led to the expanding universe. That is how this universe came into being, and it continues to expand. What does spirituality say about creation?”

My Master smiled and said, “In anything, there is no such thing as a straight line. Even a straight line is technically only a small portion of a huge circle.”

Seeing the confusion, Sri Swamiji explained, “The universe goes around a cycle of creation and destruction; expansion and contraction. Since it is a precise cycle, it cannot be just nature. There is intelligent design at work.” With a smile, he added in a lighter vein, “Maybe we should call it a ‘Big Man’ theory!”

We all laughed, “Science doesn’t seem to agree with that!”

At that time, my Master said, “Just wait and see. I have faith in scientific development too. Science is truly expanding and certainly will come and agree with what our ancient scientists have said thousands of years ago.”

Today, it is indeed true. Science IS coming closer to what great ancient Indian scientists like Sage Vasishta, Sage Vishwamitra, Sage Agastya and others have all always said.

Today modern scientists are also considering an alternative theory of creation called the Big Bounce Theory. This theory says that just like a ball bounces back and forth, the universe expands and contracts in a series of infinite cycles of creation and destruction! And our (Indian) scientists have been saying this for the past thousands of years. Now open-minded scientists are looking at this and are being inspired to understand what an intelligent culture the timeless Indian culture is.

The people we called rishis lived a life of science and spirituality. They lived a life of head and heart. And that’s the culture we have all come from. We can be sharp in the head and also broaden our hearts.

One wonderful quality of Indians that people love all over the world is humility. Leaders need to be humble. Only then can they be effective, value-adding leaders. That humility comes when we do one thing. Pray.

Here is another ‘AND’. When others look at us and are awed, that is success. But when we look at ourselves and are happy, that is called inner happiness. Should I be successful for the outside world or should I be happy in the bliss and happiness inside me? India says the answer is not OR but AND. One can be successful ‘out in society’ AND at the same time find the happiness within. It is possible. How?

When we understand the AND of efforts and prayers. We do need to put efforts. But it is sad that many people make fun of prayers, and young minds often get influenced.

Do we understand who has shown us the path of prayers? The same great ancient rishis who explained creation long before modern science could even think along the lines of Big Bounce. If we look at those rishis and laugh, there are no greater fools than us. True rationality is to be open and understand what our sages have said constantly, over and over again, for so many years.

Remember this… no one ever said in our country that prayers substitute efforts. They said ‘AND’ not ‘OR’.

You, as students, will put in your best efforts to prepare for the upcoming exams. Whether we like it or not, grades are important to us. But for you to complete the cycle of head and heart, prayers are going to supplement your efforts. And we are going to show you how to Pray.

What is prayer? We see with our eyes. But do we know what is happening outside this room? No, we don’t. Can we hear if someone speaks outside this room? No, we cannot. Just like there is a limit for our eyes and ears, there is a limit to our buddhi or intellect also. We cannot think beyond that limit. But Prayers can help expand our mind/intellect. For our own self-development.

So when you achieve success and happiness, you are actually going to attain it through both efforts and prayers.

What is faith? 90% of what happens in our life happens because of faith. You go to a doctor with a stomach ache. He gives you a pill. It is just something that is white and round. Do you know what it is? Do you know its chemical composition? Do you know if you will be cured if you eat it? You don’t know. Still, you pop it into your mouth. Why? Faith.

When someone builds a house for you, and they say it is now ready to live in, do you know whether the top beam can really hold the roof? You don’t know. Do you know how to test it? No. Yet you sleep peacefully at night. Why? Faith.

Without faith, we will be animals. But faith makes humans not only human but also divine. That’s why they say humanity and divinity are inseparable.

That is the faith we are talking about. Faith in your own self AND faith in God; and supplement that with a powerful Name.

The mind can be influenced by sound. Some sounds put us to sleep, some sounds irritate us, some sounds kindle valor. When someone has to go to the battlefield, no one plays the flute or violin. They beat the drums and blow a conch because those sounds awaken courage and valor within us. Similarly, if we need to expand our hearts, there are certain sounds that will enable that. Those are called mantras. It is not to do with religion alone. It is a simple science of interaction between sound and the mind. That is the reason why we want to pray with faith – in your own self and in the divinity – with the Mahamantra.

Sit erect. Close your eyes. Repeat the below mantra. The most important part is paying attention to the mantra you are saying. That is how the mind becomes sharp. You can use it for anything you want… arts, sports or studies. So take a deep breath and chant:

May that benevolent Divinity bestow grace upon us all.

Every year during the first week of January, G.O.D. India conducts a major Students Mass Prayer in Chennai, India where thousands of 12th grade students from numerous schools around the city are fortunate to listen to inspiring words from two prime disciples of HH Maharanyam Sri Sri Muralidhara Swamiji – Sri Ramanujamji and Dr. Bhagyanathanji. The speakers inspire these youth to aim to perform well in their upcoming key examinations through sincere efforts and faithful prayer with the Mahamantra.
Such Students Mass Prayers are also conducted through the year in several other cities and states in India by other disciples of Sri Swamiji.