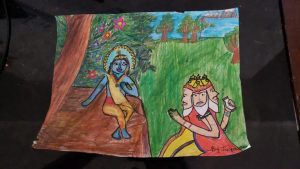 Last month, we saw how the Lord enjoyed vana-bhojanam with his friends and vanquished Agasura, the python. Sri Shuka concluded the lila stating that the boys reported the killing of the demon Agasura in their respective households only after a year. At this juncture, King Parikshith became curious as to why the boys took so much time. In order to answer him, Sri Shuka started narrating the next lila.

When the gopas and Krishna were enjoying vana-bhojana, the gopas suddenly noticed that some of their calves had gone missing. They became afraid. Krishna consoled them and got up to go in search of the calves. He looked here and there for the calves but couldn’t find them. So, he went deep into the forest. After traveling some distance, when he still could not find the calves, he decided to turn back. When he came back, he noticed that the gopas too were missing now.

In a moment, he realized who was behind this disappearance. He saw that it was none other than Lord Brahma, the creator who had taken away the gopas and calves. Since, it was already the time to go back home, the Supreme Lord Krishna who is the omniscient, omni-present, the cause of this creation, the one who permeates this entire creation took the forms of the various missing gopas and the calves.

Sri Shuka says, He exactly replicated the cowherd and the calves (yAvad vatsapa vatsakAlpaka-vapu:) matching the length of their arms and legs (yAvat karAnghryAdikam..). He even replicated the various objects they were carrying (yashTi-vishANa-veNu-dala-shig), their clothes and their ornaments (yAvat vibhUshAmbaram). Not only that, he even reproduced their character, mannerisms including their walk and talk. Everything was filled with the potency of the Supreme Lord.

It is this particular experience, Sri Swamiji has described in a beautiful kirtan – “Engum kannan, edhilum kannan…” set in the raga punnagavarali and Adi talam. The lyrics and the meaning are presented below.

The four-headed one (Brahma), his infinite creations
I see nothing else but Krishna

The seer is Krishna as well as the sight
The act of seeing is also Krishna
Apart from Krishna, I
Cannot See anywhere anytime!