A Mother: The First Guru

We all know the story of little Dhruva, who did intense tapas and saw the Lord, and eventually became the Dhruva star alongside the Saptarishi mandala. But how did he get to see the Lord in such a young age? Who inspired him? 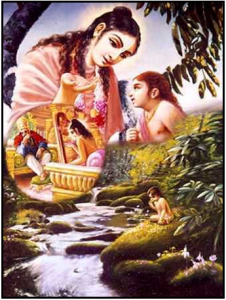 Dhruva was the son of King Uttanapada and his first wife, Sunithi. However, both Sunithi and Dhruva were neglected by the king as he always spent his time with his other queen, Suruchi, and her son Uttama. Dhruva grew up without the love of a father.

When he was about 5 years old, Dhruva found out from his friends that the king was his father. Immediately he directly went to the palace and sat on his father’s lap. The mean Queen Suruchi however could not stand that and pushed him off the king’s lap. She said that if he wanted to sit there, he should be born to her and not to anybody else, and asked him to do penance to the Lord for that reason.

Little Dhruva was deeply hurt. He went crying to his mother Sunithi and told her the whole story. The helpless mother consoled him and asked him not to worry. And this is where Sunithi reacted differently from normal mothers; a reaction that set her apart and gave undying glory to her little son.

Instead of simply consoling her little child and saying “everything will be all right”, she told him that, in such a situation, only the Lord could really help him. She told him to seek refuge, not in a worldly father, but in the Father of the whole world. Thus, by encouraging him to seek the Lord (even if it meant going alone to the forest), she guided her son on the right path towards the greatest good.

Listening to her, the little prince bravely set off to the wild forest with determination. Sunithi, who had strong faith in the Lord, knew that the Lord would protect her son from all dangers.

When Dhruva went in search of the Lord, Sage Narada came there as a Guru and showed him the way to see Him. Following his Guru’s instructions, Dhruva was, in a very short time, able to have darshan of the Father of the world, and obtain His immense love and blessings.

A mother should always lead her child only in the right direction which is towards the Lord; just as Sunithi did. Such a mother is indeed a child’s first Guru.

This year, Mother’s Day falls on May 13. On this day, let us pray for the welfare and happiness of our selfless mothers who shower so much love on us.

One Response to "A Mother: The First Guru"