Srimad Bhagavatam reveals the supreme secret in its very first sloka where it uses the phrase -“satyam param dhimahi” (Let us meditate on the Supreme Lord of the nature of Truth). 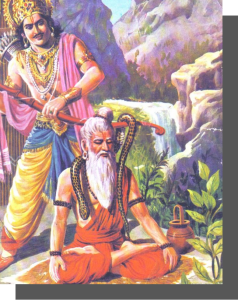 Bhagavan is the absolute truth and He alone is the truth. Therefore an action based on falsehood will clearly lead one away from Bhagavan. If one earnestly wishes to tread the path of attaining Bhagavan, committing a mistake on purpose is an act one must avoid at all times. But isn’t it also true that to err is human? A forsaken moment of loss of self-control is enough to commit a mistake. Then what is the fate of the wrong doer?  Does he have a way of moving forward despite the wrong act? Srimad Bhagavatam shows how one should act in case a mistake is committed. This is exemplified in the story of King Parikshith whose heartfelt repentance for his mistake led him, by God’s sheer grace, to Bhagavan Himself.

Parikshith was the son of Uttara and Abhimanyu. It was in his mother’s womb that he had the first vision of the Lord. The Lord had entered Uttara’s womb in order to save Parikshith by annihilating the Brahmastra released by Ashvattama with the intent to destroy the lineage of Pandus. Since the child was saved by the Lord, he was named Vishnuratha at birth and his never ending curiosity to find his savior, earned him the name Parikshith. He was a fine successor in the line of Pandus and a fit ascendant to the throne illuminated by them. Just as the brahmanas prophesied at Parikshith’s birth he turned out be: true to his word like Sri Rama, a protector of his subjects like Ikshwaku, kind like King Sibi, gracious like Lord Shiva, and in virtuosity he was a follower of Sri Hari Himself. During his reign as the emperor, Parikshith confronted Kali purusha, the demon of Kali Yuga, and subdued him. But like a bee that extracts the best out of everything, Parikshith let Kali stay on earth for primarily its main merit – that simply chanting the Lord’s Name will lead one to final beatitude in this Yuga, unlike in the other Yugas where more stringent, difficult paths need to be followed.

However, it must have been because of this brief rendezvous with Kali that Parikshith committed the grave mistake of insulting a great mahatma. Once during a hunting trip he was thirsty and entered Sage Sameeka’s ashram for water. When Parikshith asked for water, the sage who was in deep meditation on the Lord, neither saw the king nor offered him water or a seat. Oppressed by anger and frustration, Parikshith threw a dead serpent across the shoulders of the sage to test his meditative state, before walking away. The sage remained completely unaware of the incident.

But when Parikshith went back to his palace, he realized the depravity of his act. He cringed with despair for his reproachful conduct against a mahatma. His guilty heart throbbed with regret and he could not perform any of his kingly duties as he felt unworthy of his position, having himself acted so dishonorably. Parikshith was sure that he would face a formidable calamity as he had acted against the Lord’s interest of protecting the brahmanas. He actually prayed that a fire in the form of a curse should instantly destroy everything that he was attached to, so that he would never even think of hurting a mahatma again.

Parikshith was an emperor and he could have found numerous ways of getting around the curse but he did not do so! Instead, he boldly accepted the consequences of his action and wished for a punishment that would ensure that he would never commit such a mistake again in his life.

Parikshith’s life shows that repentance should be beyond regret and sorrow. It is like a making a U-turn away from the wrong path, towards the path of truth, resolving never to look back. Accepting one’s mistake involves overcoming one’s enormous ego, which in itself is instantly purifying. Rather than justifying and defending one’s error, accepting a mistake is a step in the positive direction. It is a self-resolution never to tread the wrong path again.

King Parikshith briefly fell from his conduct of stately stature, but the moment he accepted the mistake he progressed promptly in his spiritual path. He gladly accepted the curse of Sringi, Sage Sameeka’s son, of death by the bite of the serpent king Takshaka in seven days (for which, incidentally, Sringi was remonstrated by his great father as being too harsh a punishment for a small mistake).

But the repentant Parikshith took the curse as a blessing in disguise as it speedily aroused in him dispassion for his kingdom, riches and loved ones. This dispassion and his earnest desire to attain Bhagavan in seven days triggered his meeting with his Guru, Sri Shuka, who bestowed him with the ambrosia of Bhagavatam. Drinking this nectar of immortality, Parikshith finally got what he was always looking for – Lord Sri Hari.

When even a virtuous king like Parikshith fell once from the path of truth, it is needless to say that we ordinary mortals will encounter many a fall in our lives. But acceptance of our mistakes is the first step towards getting back on the right path. This will lead to heartfelt repentance and offering up of our ego to the Feet of Bhagavan, thus ushering in His grace and bestowing the highest good on us.