The Vedas are the basis of our Sanatana Dharma. It is the blueprint of the entire universe. It is the Word of God.

The Vedas were originally absorbed and given to the world by great rishis. Since then, they have been passed down from generation to generation from a Guru to his disciples and so on, for millions of years. The constant chanting and study of Vedas is very important for the sustenance of dharma in this world. 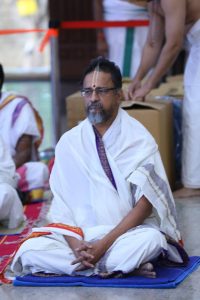 But now and then, due to Time, the Vedas disappear from the view of the world. And always there are Mahatmas who strive to revive Vedic knowledge and reinstate it in its exalted position. HH Sri Sri Muralidhara Swamiji would always speak of Sri Kanchi Mahaperiyava as one such mahatma in recent times whose revived and protected the Vedas, which had almost disappeared at the time.

Sri Sri Muralidhara Swamiji also strives to protect and grow the tree of Vedas by emphasizing the importance of the Vedas and encouraging students to take up its study, establishing Veda patashalas, conducting conferences (sadas) where Vedic scholars from all across the country come together to chant the Vedas and learn from each other, and more.

In the article below, Dr. Bhagyanathanji speaks of one such Vedic event that was held recently in Bengaluru.

How Mahans Protect the Vedas

Among these, due to the efforts of Sri Brahamanand, Sri Sri Muralidhara Swamiji Kainkarya Sabha was established by Veda vidyarthis who graduated from these centers and other Vedic scholars. Under the auspices of this Sabha, Veda parayana and satsangs are often conducted in many places.

Sri Anand and Sri Vedaram, who completed adhyayana in our patashala, and Sri Santosh are its trustees. Through this Sabha, on the occasion of Sri Swamiji’s star (tirunakshatra), Yajur Veda Samhitha Parayan took place in 2015 in Ayodhya Ashwamedha mandap, Chennai, for the first time. The second event to happen under the auspices of this Sabha was during the auspicious time of Mahamaga when Rig Veda Parayan, Yajur Veda Moola, Krama, Gana, Sama Veda Parayana and Prabandha took place from Feb 12-22, 2016 in Sastra University, Kumbakonam. 67 Vedic vidwans (scholars) participated in this event. The third event was an Akila Bharatha Sama Veda Sammelan from July 20-29, 2016 in the Seetharama hall of Sri Sundara Anjaneyaswami temple in Bengaluru. 27 Sama Veda scholars did Ashtabrahmanandam Parayan in this event.

Recently in Kalkere, Bengaluru, at the premises of Sri Sundara Anjaneya temple, in the Seetharama hall, 48 Veda scholars did Rig Veda Gana Parayan completely for seven days, from July 16-22, 2017. This took place under the supervision of an adhyapak (teacher) of Sri Sandeepani Gurukula, Brahmashri Udhaneswarabhat Ganapatigal. Brahmashri Shridhar Ganapatigal was very helpful for the preparations for the Rig Veda Parayan.

Rig Veda is classified into 8 parts. Parayan was done by splitting one ashtaka for six and making eight groups.

On the day of completion, Brahmashri Venugopala Ganapatigal was awarded the title “Rig VedAcchAriya:”. He has trained many Rig Veda Ganapatigals. He has done parayana of all the eight 8 Vikruthis. Brahmashri Surya Narayana Ganapatigal was given the title “Rig Veda Raja”. Normally, certain questions will be asked during the Vedic exams. When answered, the candidate will be informed whether it’s right or wrong. But, in Maharashtra, when giving a Veda exam, one has to sit on a stage alone and chant the Gana of the whole Rig Veda without seeing. The scholars who are seated down would be watching the book keenly ensuring that there are no errors. In Satara, Maharashtra, Brahmashri Surya Narayana Ganapatigal gave this Rig Veda Gana exam for 41 days and got this title. People from Maharashtra took him for procession on an elephant (Gaja Arohanam). Here in Bengaluru, Sri Swamiji took the Ganapatigal and his peers for procession on a horse (Ashva Arohanam).

Bhagavata Dharma and Vaidheeka Dharma are like our two eyes. In Bhagavata Dharma, it is a standard practice to worship the feet (pada pooja) of the bhagavatas who do Namasankirtan or those who do Uncchavarthi. Likewise, respects were offered to the Vedic scholars who did Rig Veda Gana Parayana; Pada pooja was done to them, they were adorned with crowns on the head, were offered garlands and offerings were given on behalf of Kainkarya sabha by placing them on the head.

Apart from this, on behalf of Dr Yegnasubramanian’s Om Foundation, Sri Sethuraman took part and honored each vaidheeka with 10,000 rupees (sambavanai). Sri Sankaranarayanan from Bengaluru made preparations and took care of the necessities of the Vedic scholars in a special manner. The devotees who had come to take part also did whatever service they could do to the vidwans. Gana Parayana thus took place in a grand manner.

Sri Sri Anna (Sri Krishnapremi Swamigal) visited Sri Sundara Anjaneyai temple on July 17 around 8:30 in the morning. He took part in the Gana parayana and gave his anugraha bhashanam (blessing message) which was the crown jewel of the event and made it special. Sri Sri Anna blessed gold coins to all the Vedic scholars personally with his divine hands.

During the time of completion, Sri Swamiji in his benedictory address said, “Sridhariyam is a very acclaimed commentary for Srimad Bhagavatam. Sridharar, in his commentary on a sloka in the first chapter, ‘satram swargAya lOkAya sahasra samamasatha’ makes an interesting observation. In the place Naimisharanyam, where thousands had congregated to perform the ‘Satra’ yaga, Sri Saunaka raises the first question. This is because, in a gathering of scholars, the one who has studied the Rig Veda is deemed to be the most senior. Saunaka is a Rig Vedi. As a result, he was given the honor of raising the first question. This gathering has so many Rig Vedic scholars. This is definitely a gathering of vidwans and learned people. I pray to Veda matha to bless all those who have been a part of this parayan, those who were helpful in any way and those who made arrangements for the parayan.”