This is one of Krishna’s many leelas that truly exposes the power of devotion to be unmatched by knowledge or power. It shows that devotion is in itself an extremely effective way to attain God. 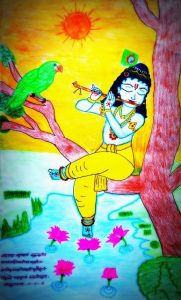 The leela starts with Krishna and his friends roaming near the bank of river Yamuna. The boys were extremely hungry and they looked to Krishna and Balarama to act as leaders in solving the problem. Krishna decided to send someone to ask some nearby brahmanas for food. He discerned that by mentioning Krishna and Balarama, food will surely be provided. However, upon arrival, the brahmanas completely ignored the boys’ request and instead continued to focus on the yajna that they were performing.

Realizing that the endeavor was futile, the boys then returned to Krishna. However, impervious to the situation, Krishna asserted that by trying again, this time with the wives, food will certainly be obtained. This time, the wives’ response was of awe and surprise. Having heard of Krishna’s praise, the wives were excited to finally see him and rushed there with food.

It was only now that the brahmanas realized their folly. “What use is our grand knowledge of the Vedas when we ignore the small request of the Lord himself?” They cried out in vain. “Look at our wives; they neither have the knowledge nor the penance that we do, yet they have gone to Krishna with the utmost devotion,” they reasoned.

The purpose of the story is to show that although knowledge and penance can be important, without devotion to the Lord, all attempts will be in vain.