Faith is greater than God!

Faith is defined as the complete belief we have in someone or something. It is essential for pursuing worldly goals as well as in spiritual practice. Faith is, in fact, the fundamental requirement for Bhakti.

When one does not have faith, even if God Himself comes and stands in front of him, he will not believe that it is God and instead imagine it to be a trick.

But when someone has faith, he can see God even in a mere stone. 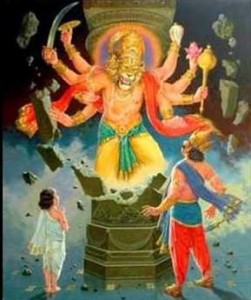 That is why Sri Sri Muralidhara Swamiji  and many other Mahatmas too, say, “Faith is greater than God himself.”

It is easy to claim that one has faith when everything is going according to his wish. But it is true faith only when one has that same belief and trust even when situations are not conducive.

Even for complete surrender, one needs faith. This is easy to say, but difficult to practice.

Faith comes naturally only when we know something to be true. The great devotee Prahlada’s father tried to kill him several times by throwing him into the ocean, pushing him off a mountain, throwing him into fire and so on. But Prahlada did not bat an eyelid whatsoever as he had complete faith in the Lord that whatever happened to him was His will. Later, when Hiranyakashipu asked Prahlada if the Lord was present in the pillar, Prahlada boldly replied that the Lord was indeed there and prostrated to the pillar. And Lord Narasimha immediately came out of the pillar to make the words of His devotee true! Such was the greatness of Prahlada’s faith; he knew God’s existence and protection as the Truth!

To be able to attain God, one has to either adhere strictly to the truth or follow dharma perfectly or have complete steadfast faith. Without at least one of these, it is difficult to attain God.

King Harischandra always spoke the truth. In the end, God himself came to him. The Pandavas always treaded the path of Dharma. Lord Krishna was there with them throughout. Similarly, if one has steadfast faith, one can see the Lord.

Once there was a very learned man who had a very average disciple. The disciple did not understand the lessons the learned man taught. But he was very obedient. The disciple would take care of daily chores in the Ashram and any other tasks his master gave him. Everyday, the master gave him some rice and grains to cook his own food. And the only instruction the master had given him was to give the food to Lord Krishna to eat before he ate it. The disciple took the instruction literally and on the first day, he waited for the Lord to come. He waited and waited. The day was almost over. The disciple was faint with hunger. Yet, he decided to wait. Finally, as the disciple was almost about to collapse, the Lord came as a 12 year old boy and ate his food. He left some for the disciple and promised to come the next day. What gave this disciple—who could not even understand his master’s lessons—the vision of Lord Krishna and the fortune of partaking of His leftovers? It was simply his faith in his Guru’s words. Guru is God in human form.

Sage Matanga was a great sage who, before leaving the mortal world, gave the Rama nama to his devotee Sabari. He asked her to constantly chant the Name and said that Lord Rama would come to her doorstep. Sabari had complete faith in her Guru’s words and waited for the arrival of Lord Rama. Everyday she cleaned her house and collected fruits and berries to give to Lord Rama, in case he came that day. But He did not come for many many years. Yet Sabari continued the same practice every day because she knew that her Guru’s words will never fail.

After several years, just as her Guru had said, Lord Rama indeed stood at her doorstep!

When we hear about the unflinching faith of these devotees, we too long for that faith in the Lord.

But is it even practically possible, considering the doubting nature of our minds? A slight hint of a problem in our lives… and the mind immediately questions the very existence of the Lord! If that is the case, how can common people like us develop this steadfast faith?

(I pray to Him only by His grace)

Sri Sri Muralidhara Swamiji too assures that steadfast faith is possible only by God’s grace. Then what should we do? The only thing we need to do – and indeed, the only thing we CAN do – is pray deeply and sincerely to our Guru or God to bless us with steadfast faith and devotion towards them. Sincere prayers are extremely powerful and can bring God’s grace on us easily.

One Response to "Faith is greater than God!"