An interaction between compassionate Sri Swamiji and his young devotee 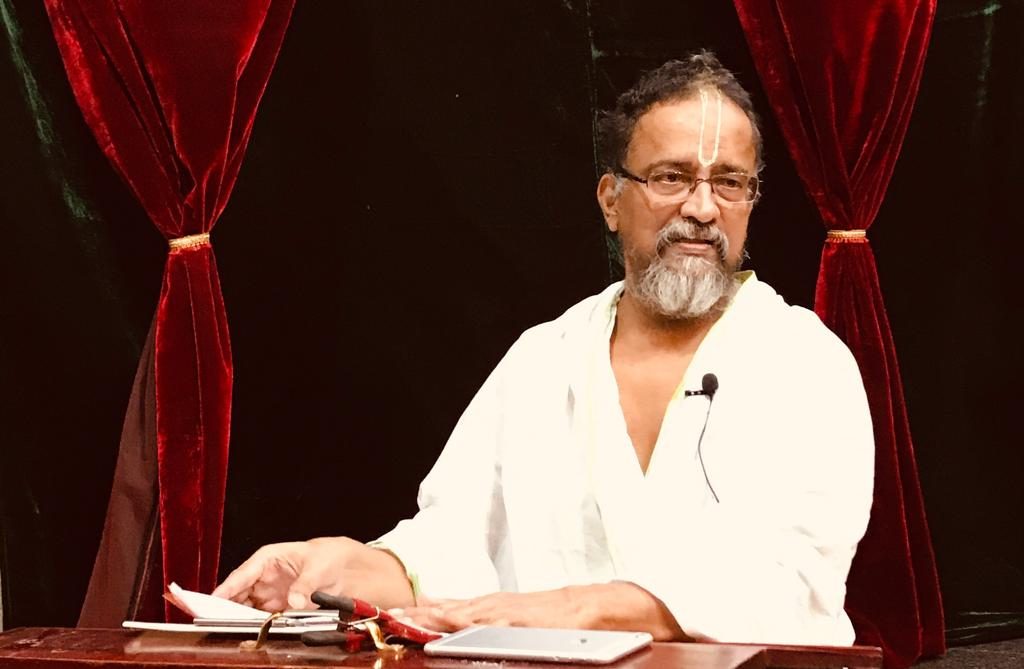 College freshman Advaith Subramanian from the USA, shares that he grew up in an atmosphere where his weekends were filled with Nama chanting and satsang, car rides to school with Aditya Hrudayam and Lalitha Sahasranamam, and his summers with Sampradaya heritage camps. In this family environment where religion was emphasized very much, and there was an unwavering commitment and belief in satsang and God, it was difficult for him to find the words or reasoning to challenge these tenets. Later, as he prepared to enter college, Advaith felt that college was so much more than mere higher studies. For him, it represented a new era of his life that was characterized by decisions his parents couldn’t help him with, social and environmental pressures that he had to guide himself through, and questions that challenged his old ways of thinking. So, at that time, he started having questions about what God is, and why he couldn’t see the Krishna that he had been taught to believe and celebrate. He wondered why, when he offered prasadam to the deities in his pooja room, he didn’t see God consuming the food; when he did dolotsavam, he didn’t see a divine child drinking the milk and fruits he was offering, or slowly falling asleep when he was supposed to be lulling the deity to sleep. Fortunately for Advaith though, thanks to his family, he has grown up having a very close relationship with Sri Swamiji (HH Maharanyam Sri Sri Muralidhara Swamiji). He has the fortune of being in constant communication with him, and has often had hours upon hours of interaction with him. Yet, it disturbed him that he couldn’t find the same unwavering faith that he had in Sri Swamiji when it came to Shiva or Krishna.

So last summer (2022), when he visited India and Sri Swamiji before stepping into college, he candidly asked Sri Swamiji some questions regarding faith and God.

In Advaith’s own words, “In reply, Sri Swamiji offered a series of responses with logical support for why God does exist, and, instead of countering my beliefs and opinions, Sri Swamiji ended up supporting a lot of it. He simply offered more information that I could fit into my perspective to get a more well-rounded perspective of God.”

Advaith shares below his questions and Sri Swamiji’s responses in the hope that these can also benefit other youth who might have similar questions.

Advaith: Guruji, if God exists, why am I not able to see Him in my pooja room? When I offer prasadam to the deities in my pooja room, I don’t see God consuming the food. When I do dolotsavam, I don’t see anyone drinking the milk and fruits or falling asleep. Why is that? And when this is the case, how do I know if God really exists.

Sri Swamiji: God is different from humans. While we consume food by digesting the actual matter, God likes to consume its essence. Where is the evidence that such a thing is possible? Let’s take a different example. In certain parts of the world where black magic is practiced, people worship certain spirits. These spirits expect offerings of tamasic foods like alcohol, meat, etc. So those who ‘worship’ these spirits must provide a constant supply of such offerings to keep them happy. When the spirits are satiated with these offerings, they fulfill their worshipers’ desires. However, we also see that when the supply stops, these spirits get angry and begin to curse their followers and disrupt their lives. This is a common pattern seen in places where such dangerous Voodoo and black magic is practiced. So when there is such evidence of these evil spirits getting angry when no food is supplied, it must mean that they are consuming, or at the very least, appreciating what is being offered to them. Now, for our purposes, look at it this way. If even such mere spirits have the capacity to consume the essence of foods, then can’t the Supreme God – who is way beyond all these trifling spirits; who is the embodiment of pure divinity and love; who is ever compassionate; and who knows we are trying to worship and connect with Him in our own small way – can He not consume the essence of what we offer Him? Similarly, when we do dolotsavam, the most important thing to consider is the fact that, just like food, God is enjoying the essence of us putting him to sleep. It is not necessarily the same kind of sleep that we ourselves go through every night, but just because it is different, it doesn’t mean that it doesn’t exist.

Advaith: Guruji, we all want to see God in his true form at some point in our lives. In my pooja room at home, I don’t see ‘God,’ but only idols that are a visual representation of God…

Sri Swamiji: What you have in your pooja room may be sculpted vigrahams, but these murthys channel the incomprehensible energy of God in a way that we can see with our eyes, and that we can worship. That manifestation of God is what we offer our food to, put to sleep, and treat as a special member of our households. God is something that the average human mind cannot comprehend if He stands before us. So if God was to, in His fullest form, stand in our pooja rooms, we would not be able to see Him or bear His presence.

Advaith: What if I do want to see Krishna in his fullest form? How do I do that?

Sri Swamiji: Chant Nama along with me –

Continuously chanting Nama with the sole purpose of wanting to see Krishna – as opposed to chanting with other prayers in mind like say, doing well on your anthropology exam, or for your parents to buy you the new shoes you want – can ultimately bring you to see Krishna in His complete form.

Advaith: Guruji, why should I believe everything that you are saying? How do I know that there truly is that essence or that manifestation of God?

Sri Swamiji (in his most grounded manner): Because you believe in me, and I told you.

After this moving interaction with Sri Swamiji, Advaith shares that since he has come to college, he has found that satsang and Nama are his anchors. He has a small photo of Sri Swamiji in his dorm room, and when he heads out for classes or to hang out with his friends in the evening, he knows that “He’s watching me, along with the Krishna He gave me to keep in my dorm room.” Advaith says he finds comfort in having Him there because he knows that after a long day, He’s someone he can come back home to. Advaith continues to use Nama as a platform for meditation and improving his mental health, and in the back of his mind, he has this constant desire to see God face-to-face by chanting the Nama that Sri Swamiji has given him. He says that since coming to college he may have questioned his values, decisions, and beliefs a lot, and like most kids, he sometimes disagrees with his parents. However, he has found great comfort in the unwavering faith he has in Sri Swamiji and how He has raised him. That’s something, he admits, he hasn’t had to question now as he was blessed to pose his doubts directly to Him during this long discussion, and Advaith is very grateful for it. He finds this faith in Sri Swamiji as his anchor in life as he continues to learn and grow and experience life.

Click here to go back to the October 2022 newsletter page:
https://godivinity.org/newsletters/nama-dwaar-newsletter-october-2022/