This series was originally published in Tamil MadhuraMurali monthly magazine in India, as a 12-part series. Based on Sri Swamiji’s Madhurageetham, “Govindanukku Aatpatta Kudumbamamma Engal Kudumbam”, it speaks beautifully of how the family members of our satsang lead / need to lead their lives.

This is the translation of the second article in this series. Click here for part 1: http://godivinity.org/dear-govindas-family-govindanukku-aatpatta-kudumbamamma/

Leading a Life Beholden to Govinda

(A Madhurageetham that speaks of the beauty of Govinda, “needhAn azhagenDrAl un peyarum azhagO… (O Krishna, You are beautiful! And so is Your Name!)” ends by saying “bhaktarum azhagO paripAlippadum azhagO, azhagan un thoDarbAl anaitthum azhagO (Your devotees are beautiful, the way You guide them is also beautiful! O Beautiful One! Simply through association with You, everything is indeed beautiful!)”.
The Madhurageetham that we are going to look at in detail below is one that sings specifically and sweetly of the beauty of the lives of Govinda’s devotees and the beauty of the way in which Govinda takes care of them…)

In Bhagavad Gita, when Arjuna asks Sri Krishna about how a jnani (sthitaprajna) would be, how he would behave, how he would interact with others, Krishna speaks of them lovingly and joyfully. When it comes to His devotees, Krishna is so full of love for them! In Bhagavad Gita, even without Arjuna asking, Krishna sings wholeheartedly about the qualities of His true bhaktas; He Himself exclaims that He loves such devotees very much. So how will these devotees be, who have obtained a special place in Krishna’s heart? What will such devotees do? How will they behave in the world? We also desire to know about their qualities, don’t we? 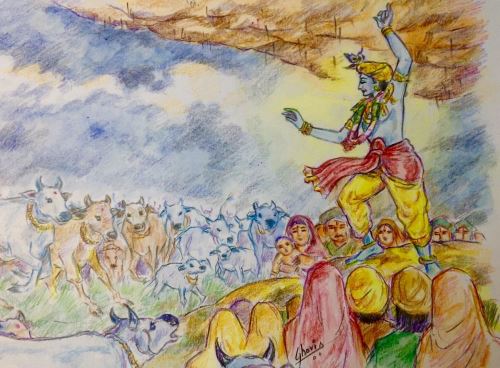 This madhurageetham is the one that illustrates this sweetly and beautifully:
(The detailed meaning of each verse of this song is what is going to be delved into in the upcoming episodes of this series.)

Krishna is the epitome of simplicity; so His devotees too are indeed like that. This song too – which describes the lives of His devotees who have taken blissful refuge in Him – is set to a simple ragam. The fact that its words also happen to be simple and sweet, is apt indeed.
Krishna is Navarasa Nayakan (hero who expresses the nine emotions, navarasas). His stories are also ‘navarasa bharitam’, filled with the navarasas. The lives of His devotees who live under His refuge, is also navam-navam. The path of Krishna bhakti is also nava vidham (has nine ways). This madhurageetham – that sings of families who celebrate Krishna as Bhagavan, who hold Krishna’s krupa as their lifeline, and who do prema bhakti to Krishna – has also emerged with nine charanams.

Here our Guru Maharaj starts as Govindanukku ‘aatpatta’ kudumbam.
Those who know the Tamil language well will say that this Tamil word ‘aatpatta’ has three meanings – ‘living a life of servitude (or being beholden to)’, ‘reaching a high state’, ‘recovering from a disease or pain’. See! The essence of the entire song is present in just in this one word. If we live a life of servitude to Govinda (aatpattal), by His compassion we will be cured of the disease of samsara and attain the true good (aatpattu), and with His grace, we can also attain the highest state (aatpadalam).
How wonderfully that ‘Govinda’ is protecting the families that are ‘Govindanukku’ aatpatta kudumbam!

That time, in Brindavanam, when Indra became angry that the Gopas stopped the yagna that they had been performing for him and tried to destroy the entire Gokula with raging rains; and when the lakhs of cows and Gopas surrendered unto Him, He did not just say ‘kaiviDEn’ (that he will not let them down) with his lips, but instead actually showed it by lifting the Govardhana mountain with His hands and protecting them from the rains, did He not?
Even today that same Govinda is protecting the lakhs of families who are living depending on Him, by bearing their mountain-like burden Himself, keeping them from drowning in the enormous flood of samsara, protecting them from thunderous accidents that happen now and then, from the powerful gale winds of incidents that shake their stability, when the lightning of worry about the future blinds them… is that same Govinda not protecting them even today through the wonderful Govardhana-like Sadguru who is none other than Himself? Isn’t that why our Gurunathar sings, “guru veru, hari vEru enbadhu ariyAdavar pEcchu” (Only the ignorant say that Guru is different from Hari).
Our satsang families also live like this only, in servitude to Govinda. Thinking again and again about the immense grace showered by Govinda, melting with gratitude and filled to the brim with the feeling, “Indeed, who is as blessed as us?”, desiring to live in a way that He would be delighted with, living with the resolve that no matter what happens in life, “Why should I worry when Govinda and Sadgurunatha are there?”, with the view that whatever happens is His will, with the staunch faith that Krishna will never let us down, with the clarity that our family, home, children, profession… everything is His prasadam, and that the path taken by our Radhai, our Govindan’s Devi, is only our path (“Radhai sellum padhaiye nam padhai”) – with such a mindset of leading life as a divine celebration… indeed this is only leading a life of belonging to Govinda (Govindanukku aatpattu vazhvadhu)!
For families who live like this, Govinda Himself is the father who is the head of the family, Sri Radha is the mother, all satsang devotees are our family members. These families who live like this are indeed Govinda’s families! Govinda also thinks proudly, “These people have taken refuge in me; they have taken me as their Lord, they are My family!” and feels, “It is indeed my vratham that I must watch over them and take care of them lovingly!”
Our satsang families are all Govinda’s families, families that belong to and serve Him, sings our wonderful Sadgurunathar here proudly.
“gOvindanukkATpaTTa kuDumbamammA engaL kuDumbam”
Here our Swamiji’s usage of ‘amma’ as a suffix, is one to be relished. It implies – ‘amazement’ at the fact that while others are suffering in this samsara, we alone have such a happy life; ‘immense bliss’ at the sense that that Paramatma who has no equal (“than oppor illappannana”), Govinda Himself, has made us a part of His family!; and wonderment that “What tapas have I done for Him to take us unto Him!”
In the same way, in Venu Gita, the Gopis sing – “prAyO batAmba vihagA munayO vanEsmin…” “Amba, these birds must indeed be sages…” where they convey amazement with the use of the term “Amma!”
Sri Ramana Bhagavan also sings about the greatness of God’s grace with the use of the term “Amma” in Arunachala Ashtakam:
arivaru giriyena amartharum amma! adhisayam idhan seyal…
Amma! What wonder! Even though it looks like a stone mountain, no one can comprehend the immense grace of this Tiruvannamalai!
Yes! Govindanukku aatpatta kudumbam “amma!” engal kudumbam!
In the next nine verses, this madhurageetham speaks of the way in which these families live…
(The sweetness will continue…)