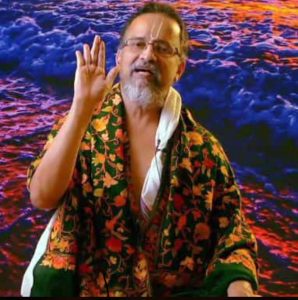 The new year is always special for everyone, and it is celebrated by the whole world crossing geographical boundaries and religious beliefs. On January 1st 1886, Sri Ramakrishna Paramahamsa became a ‘kalpatharu’ (wish-fulfilling tree) and blessed his devotees with whatever they wished for. Since then, this day has been celebrated as the ‘Kalpatharu Day’ every year. Similarly, Sri Swamiji has been continuously conducting a special Mass Prayer with the Mahamantra (which is the Kalpatharu for this Age) in a different city each year, on this particular day for well over a decade.

This year on Jan 1st 2021, however, Sri Swamiji conducted a unique mass prayer session, blessing everyone virtually due to the existing COVID-19 pandemic. Unlike natural calamities that happen during different time periods in various geographical places, last year, the COVID-19 pandemic struck across the globe at the same time, grinding the world economy to a halt where millions lost their livelihoods and their loved ones to this disease.

In his mass prayer this year, Sri Swamiji encouraged everyone to stay strong with a positive outlook despite adversity. Very clearly, he underscored that coal must go through severe conditions under high pressure and heat below the surface of earth before it emerges as a glittering diamond. Sri Swamiji quoted “Coal Under Pressure Becomes Diamond.” Such tenacity is what makes any individual glitter, ensuring that adverse conditions do not derail them from their chosen path, instead that they only strengthen them.

He firmly conveyed that faith is the only religion that can be the connecting thread to all forms of prayers, modes of worship, and different beliefs for mankind. Regardless of one’s age, wealth, or education, the easiest path to receive the Lord’s abundant grace and protection is to call out His divine names with utmost childlike faith and unwavering trust. Let us see how Sri Swamiji reaffirmed that faith can do wonders through a few episodes.

In Srirangam, a spiritual town in southern Tamil Nadu, there was once a young boy, who despite being rebuked for the mispronunciations and wrong chanting of the holy text of Srimad Bhagavad Gita wrongly, could not stop chanting out of love for Sri Krishna. To avoid further criticism, he found a secluded spot on the riverbank and started reading aloud. At that time, seeing a sadhu approaching him, he stopped chanting immediately. The sadhu enquired why he stopped reading. The boy said that he stopped out of fear of being scolded again for chanting incorrectly. The sadhu asked him why he continued chanting and what he experienced during that time. The boy said that he loved chanting the Gita, and that whenever he opened the book, he could only see Bhagavan Sri Krishna as He was teaching Bhagavad Gita to Arjuna. Instantly, the sadhu disappeared, and the same Sri Krishna who gave upadesa to Arjuna, gave darshan to the boy. This incident showed that the Lord does not get attracted to one’s intellectual prowess but gives Himself to those who have innocent love and faith towards Him.

Through the next story, Sri Swamiji explained how a king’s offerings of golden tulsi leaves caused injuries to His Holy feet; rather, the Lord was more pleased with the fresh tulsi leaves offered with love by a poor devotee. The Lord does not get pleased simply because someone is showering him a wealth of offerings but is rather pleased with the showering of true love and bhakti towards Him.

Sri Swamiji further emphasized that one must always stay positive. He insisted that one should have deep rooted faith, like a banyan tree that withstands severe weather conditions by spreading and holding on to the roots strongly by narrating an incident. There once were some merchants who, while going to another town to sell their goods, lost their entire stockpile of grains due to heavy rains during their travels. They complained that the Lord did not take care of them despite their continuous chanting and prayers before and during the storm. Later they came to know that the Lord had indeed protected them and felt thankful as the rain had diffused the landmines kept by the burglars on their way, which ended up protecting the merchants’ lives.

Here Sri Swamiji clearly explained what a prayer is and how it should be done. One must plead the Lord to be his/her companion in the journey of life. Apart from praying to fulfill basic needs and desires, one must specifically pray to the Lord to be with them all times, to help speak only pleasant and useful words that lead to success, and to bestow with healthy and prosperous lives even for their adversaries. Those who are doing such prayers are the real devotees of the Lord. Sri Swamiji highlighted that faith and righteousness are inseparable as one who has faith on the Lord will fear to do wrong deeds.

Sri Swamiji continued that we must look at things positively even at the time of adversity. As mortal human beings, we do not have the power to judge what is going to happen next and what calamity is averted. Instead of blaming, we must build the trust, that whatever is happening is Lord’s will and that He will never do anything wrong to us. We should atleast develop such intelligence to realize this fact and surrender to the Lord.

Sri Swamiji revealed that the diamond in the form of coal undergoes harsh conditions under pressure before it is being adorned as a precious ornament. Similarly, one must stay strong with faith and conviction, despite any adverse circumstances, to shine in life. Such tests only make the person prosper in life and teach a lesson to look at every event in a positive way with faith, as the Lord resides in that Faith only.

Lastly, Sri Swamiji described that steadfast faith can reveal the Lord’s divine presence. There once was a precious jewelry merchant who had a deep desire to have the darshan of Sri Krishna after listening to a discourse where a pauranika (storyteller) described the beauty of Sri Krishna adorned by His precious divine jewels. Awestruck by his description of Bhagavan’s divine jewels, the jeweler persisted in his efforts with absolute faith and had the darshan of the Lord whereas even the pauranika could not get the darshan.

Here, Sri Swamiji reiterated that having unwavering faith in the Lord is supreme compared to one’s religious knowledge to progress in the spiritual journey. Despite going to temples, reading, or preaching holy texts many of us do not hold on to the faith in the Lord staunchly. This lack of faith impedes one’s spiritual progress and must be eliminated from the mind, Sri Swamiji insisted.

Sri Swamiji suggested that those who do the prayer must go to the extent to plead with the Lord till the prayer is fulfilled. He assured that all genuine prayers will be fulfilled one day, even if it seems to take a long time to materialize. Sri Swamiji established that true prayer is nothing but holding on to the same till the Lord bestows it.

Sri Swamiji concluded the session with his blessings that the new year brings happiness, good health, family unity, bright educational future for the children, and prosperity for everyone. He also blessed that there be more brotherly and sisterly affection among fellow human beings, as we are all the children of one God. Let no one have animosity towards each other and instead pray with faith and friendliness amongst all community members. Let us welcome the new year by chanting the Mahamantra Kirtan and be bestowed with happiness, love, and affection with one another.