Ganga Dasami or Ganga Dussehra, the day when the holy Ganga descended from the heavens to the earth, will be celebrated this year on May 31, 2012. Let’s see how much you know about this sacred river and the stories associated with her. 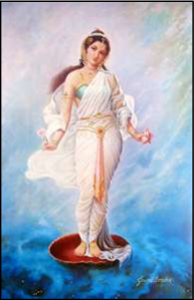 1.. In which part of India can one see the river Ganges?
A. Southwest India
B. Southern India
C. Northern India

2. During which Avatar of the lord, was Ganga born?
A. Varaha
B. Krishna
C. Vamana

3. Name the longest river in India
A. Brahmaputra
B. Ganga
C. Godavari

4. What is Ganga called in Badrinath and Kedarnath?
A. Alakananda
B. Bhageerathi
C. Ganga

5. Name the king who did severe penance for Ganga to come down to earth for the sake of his ancestors’ souls:
A. Amshuman
B. Asamanjan
C. Bhageeratha

6. Name the god who took Ganga unto his head when she descended to the earth.
A. Lord Brahma
B. Lord Shiva
C. Lord Indra

7. Name the place in India where river Ganges originates.
A. Gangotri
B. Varanasi
C. Haridwar

8. Which sage’s tapas did King Sagara’s thousand sons disturb, and as a result were burned to death?
A. Sage Durvasa
B. Sage Kapila
C. Sage Akrura

10. What is the name that river Ganga got because she came out of Sage Jahnu’s ear?
A. Jahnavi
B. Janani
C. Jaganmohini

11. Which place in India is the confluence of Alakananda and Bhageerathi?
A. Dev Prayag
B. Badrinath
C. Kasi

12. Why do people take a dip in the holy river Ganges?
A. It bestows wealth
B. It obliterates all sins
C. It bestows knowledge