The following article is from Fremont, CA Gopa Kuteeram center, on the story of Lord Sri Krishna and his dear friend, Sudama. 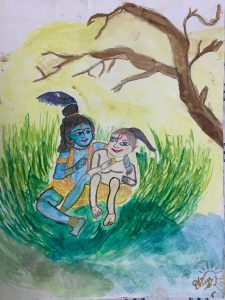 Once there lived a boy named Sudhama, and his best friend was Krishna who was God himself. They would go to the same class, and play together all day after their class.

When they both grew up, they were peaceful. Sudhama was poor with lots of kids and a wife. His wife would cook and all the kids would eat first. Whatever was left, Sudhama would eat and pray to Krishna. Krishna was rich, with his own palace and was a king. As Sudhama’s kids grew, they were getting more hungry. Sudhama’s wife begged him to ask Krishna for help. But Sudhama thought it was a bad idea. His wife begged him still. Finally he agreed to ask Krishna for help. As Sudhama doesn’t have anything, he brought sweet poha to give to Krishna. When Sudhama reached Krishna palace, Krishna came running to him, and washed his feet. They ate and talked for so much time. Sudhama thought Krishna wouldn’t like the poha he brought and started to slowly give the pouch. But Krishna took it and started eating so fast and he loved it.

Sudhama left and on his way back home, he remembered that he forgot to ask Krishna for help. But still, he kept walking to his home. As he reached his home, he saw a palace in place of his home. Sudhama was shocked! Sudhama’s wife came running to him and told him that Krishna gave them more than needed. But, Sudhama said “I didn’t ask Krishna anything!” Then, Sudhama realized that Krishna was watching them the whole time and he helped them without asking.

MORAL: God is always with you. He/She knows what you want. God gives you everything if you pray to him.