Kutti Krishna always wants butter. He gathered his friends and Balarama so he could grab the butter and go eat it with them. He went to get the butter at someone’s house.  He saw some butter and also saw that all the butter pots were high up. 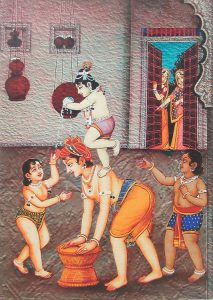 They went to a place where no one would notice them. After they ate the lady came back. she was wondering and complaining about why her butter was gone. She went to Yashoda’s house and started complaining to her. Yashoda said Krishna was somewhere playing with his friends. The lady wanted to make sure it wasn’t Krishna who ate the butter so she searched for Krishna and found him eating butter with his friends. She told Yashoda and Krishna said he was very hungry and had nothing to eat. Yashoda accepted and told the lady he won’t take butter from her and told her to go home.

Once while Krishna was taking butter, he saw a monkey. He wanted to share the butter with him. The monkey was Hanuman, While Hanuman was going home Krishna jumped to him and asked him if he wanted butter. Hanuman got enough butter  and walked away. Krishna jumped again and rubbed the extra butter all over him and fed some butter to him. Then Hanuman realized it was Krishna and bowed to him.