Two hundred kilometers north of Nathdwara is the town of Pushkar. Pushkar, like Nathdwara, is situated in the state of Rajasthan. The town developed around a lake by the same name. Pushkar Lake or Pushkar Thirth is considered one of the holiest places in India and a dip in its sacred waters, especially during Karthik Purnima is believed to yield salvation. The lake itself is said to be Lord Narayana Himself. It is in this location that the famous episode of Gajendra Moksham is said to have taken place.
Padma Purana expounds in detail about the lake’s sanctity. It is also mentioned in the two major epics of India – Ramayana and Mahabharata. Even Srimad Bhagavatam mentions the greatness of the lake. In Canto 12, Chapter 12, Sloka 61 of Srimad Bhagavatam, it says, 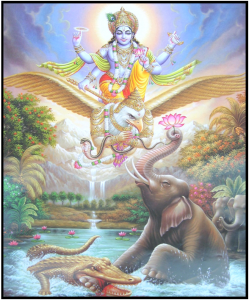 “pushkare mathurAyAm cha dvAravatyAm yatAtmavAn
uposya samhitAm etAm patitvA muchyate bhayAt”
One who reads this scripture by fasting in Pushkar, Mathura and Dwaraka will be relieved of all his fears.
Pushkar is closely associated with Lord Brahma. The lake is believed to be the manifestation of the “lotus” on which Lord Brahma is seated. Our scriptures (Puranas) also mention that Lord Brahma chose Pushkar as the site for his Maha Yagna. It is also one of the few places in the world to have a temple for him. Also, another notable place of worship at Pushkar is the ancient Varaha temple.
Sri Swamiji has written a beautiful song on Lord Narayana at Pushkar Thirtha. The lyrics and the meaning of the song can be found below:

Charanam
You are One who is gratified with leaf, flowers, water
One who is worshipped with the umbrella, fly-whisk, Veda and songs

One whose power is manifested as the source of the three worlds
One who is always be served by the devoted Muralidhara.