About 500 kilometers south of Kanchipuram, which was the holy kshetra we visited last month, is the town of Tirutangal. Geographically, this town is located in the Virudhunagar district, about 3 kilometers from Sivakasi and about 20 kilometers from Srivilliputhur, the birth town of Andal. Tirutangal is a divyadesam and the temple is found on top of a hill called Tangal. 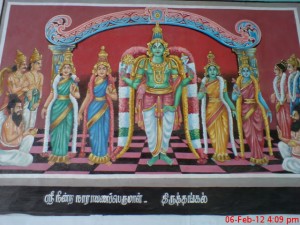 Among the Azhwars, Bhootataazhwar and Tirumangai Azhwar have sung hymns on this holy town. Sri Sri Muralidhara Swamiji too has composed a beautiful song in Raga Simmendramadhyama describing the virtues of the Lord. The lyrics and the meaning are presented here for you to read and enjoy.