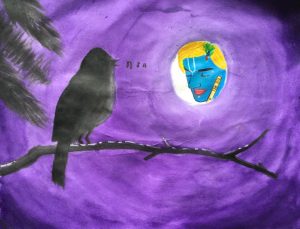 After hiding the boys, cows and the calves in Satyaloka for a year, Lord Brahma came to Gokula and saw that Lord Krishna himself had become the gopas, cows and calves and living their respective lives. On seeing this, he understood the greatness of the Lord and repented his mistake. He came in front of the Lord, prostrated and with folded hands praised the Lord. We saw “jnAne prayAsam..” last time.

(O Lord) For the one who eagerly and patiently awaits your Grace, while enduring the results of his past deeds, and offers his respects with his heart, speech and body, liberation is indeed his rightful inheritance!

Lord Brahma starts this sloka by showing the very essence of the path of Bhakti, which is, relying on the Grace of God and expressing gratitude to the Lord. “tat te anukampAm susamIkshamAna:” – they (the devotees) await the Grace of Lord eagerly. susamIkshmANa: – awaiting eagerly.

A sincere devotee looks at everything in the world – be it positive or negative, as the Grace of Lord and he solely relies on the grace of God to lead his life. He/she considers any trials and tribulations only as a result of his or her own actions and never blames Bhagavan for the troubles they may face. Instead they consider this experience of the result of their actions as also indeed the grace of Bhagavan only. That is why, Lord Brahma says, “bhunjAna evAtma-kRtaM vipAkam” – endure the sufferings which they consider as a result of their own actions.

One may wonder, what do the devotees do, when leading a life awaiting the Lord’s grace? Does that mean they do not have to do anything? In fact, it is the opposite. They do nama kirtan, katha shravana (listening to the Lord’s stories), smarana (remembering the Lord) and more. But, they do all these spiritual activities, not as a sadhana. They do it because it pleases the Lord. In the philosophy of surrender, there are 5 main aspects to surrender (sharanAgathi). In that, “AnukUlyasya sankalpa:” – vowing to do what pleases their Lord is one of the aspects.

Lord Brahma says, when a devotee leads such a life, liberation or moksha is his! We see that in the life of Sabari. Sabari was instructed to chant the “Rama” Nama by her guru and when he left his mortal coil, he promised her that Lord Rama would come of his own accord. And, from that day onwards, Sabari chanted the Lord’s name, not as a sadhana but because her Guru asked her to. And, she awaited Lord Rama’s arrival eagerly for several years! When Lord Rama finally came, she was an old woman! And, when Lord Rama came, she requested him to be a witness and attained liberation, right in front of him. The life of Sabari is a beautiful example for this “tat te anukampAm..” sloka in Brahma stuti.

When describing the devotee’s eager wait for the Lord’s Grace, Mahans often quote the example of a “chakora” bird. We find the terms “chandra chakora” in various Madhurageethams, bhajans and namavalis. This “chakora” bird which is mentioned in our scriptures, awaits the rays of the moon. While it is waiting for the moon, what can it do? It may try to call out to the moon or fly towards the sky. But, the moon has to come of its own accord.

Pallavi
(Your) Grace alone is the basis
In my life. O Krishna!