Last month we saw how the Gopas and Gopis adored their sweet little darling Krishna and prayed for his well-being when they saw demons like Shakatasura and Trinavartha coming after the little one.

Sri Shukar then narrates about Sri Gargacharya’s visit to Vraja for the naming ceremony of little Krishna and Balarama who are now about a year old.

Gargacharya gave Bhagawan many names but among them the name “ Krishna”, that reveals his soulabhya was the favorite of all and the “AyarpAdis” of Vraja enjoyed chanting and calling the sweet name “Krishna” again and again, and the Lord too felt immense pleasure in being called so.

Further in this chapter Sri Shukhacharya describes the bala leela of Krishna and Balarama and how they gave extreme joy to all the VrajaVaasis by their mischievous childhood sports. Sri Shukar first starts to describe their first movement.

In a short time, Lord Krishna and Balarama started crawling the grounds of Vraja around on their knees and hands and enjoyed playing. 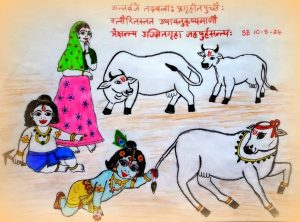 They moved by dragging their feet again and again from behind (angri yugmum anukrushya) and the tinkling sound of the tiny bells on their anklets and around their girdles (ghosha praghosha ruchiram) which jingled along as they moved looked very cute. Sri Shuka says, as they moved about like this in the muddy grounds of Vraja (vraja kardameshu) they themselves were fascinated to hear the sound of their own anklets(thAn nada hrushta manasou).

Krishna and Balarama decorated like this very beautifully with such rich ornaments and nice silk garments captivated the eyes of the young Gopis (yarhyangana darshaneeya kumara leelou). In spite of being dressed, both Krishna and Balaram would not only play and roll on the mud but also throw the dust and mud on Yashoda and Rohini. This was such a cherished sight for the Gopis that they stood gazing at these two children forever totally unmindful of anything else. Sri Shuka then moves on to say how the Lord started his baby steps all around Vraja.

(Oh Raja rishe(King Parikshith)! In a very short while, Krishna and Balarama started walking with their small feet all around in the soil of Brindavan.) 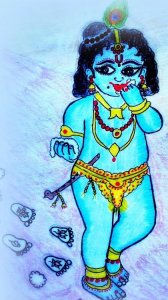 Previously they were walking with their hands and knees(janubhyam saha panibhyam) and now they started walking without using their knees and instead using their toes(agrushta janubhihi). Like this they walked freely to all the houses in Vraja bedecked with tinkling anklets on the feet, bangles in their hands. All the Gopis would run to hug and envelope them in showers of kisses. It was such a delight for them to see Krishna walk, and so all of them made it a point to be there to witness and enjoy this major milestone of Bhagawan’s childhood life.

Many Mahathmas have enjoyed these bala leelas of Bhagawan and sung numerous songs. Vishnuchithar(one among the 12 Vaishnava saints of South India) fondly known as periAzwar  had vathsalya bhaavam for the Lord – he considered himself to be Mother Yasodha and joyously experienced all the divine pastimes which the Lord displayed during Krishna Avataram.

He starts by singing,

Azwar says, Lord Krishna who has just now started to walk, moves unsteadily as a child with water dripping down his mouth. As He walks swaying from side to side, the bells in His anklets makes a tinkling sound and this along with the jewels around His waist makes a very sweet  melody. Mahatmas many a time, use objects in the world to draw comparisons to Lord Krishna. For instance, Krishna’s lips are compared to ruby, Krishna’s cheeks are compared to a mirror and the reason why they do this is because they know only Krishna and hence they understand the world by seeing Krishna. PeriAzwar here compares Bhagawan with an elephant. In Thiruppavai too, we see that Andal is reminded of the stride of a great lion as Krishna rises from His sleep and strides towards His throne. So here, Periyazhwar draws an amazing comparison between this scene of little Krishna walking with that of a giant mad elephant walking on the streets. Bhagawan’s gait even as a child reminds PeriAzwar of an elephant trudging along, flapping its ears from side to side, the chains bound to its feet making clashing sounds along with the bells hung around the string in its neck. Periyazhwar by doing this comparison starts to describe the toddler steps of Bhagawan.

Sri Swamiji too in his kirtan, “bAlakriShNanai dhyAnam seydiDuvOm” sings of Bhagawan’s “thaLar nadai” and how Bhagawan who is all-powerful and all-knowing, hides His Parathvam (His Supreme nature) and becomes “sarva sulabhan” for the simple pure hearted love of the Vrajavasees as their darling little one. Saying so, Sri Swamiji in this kirtan calls us to bring our minds to always think of Lord Sri Kirishna and His leelas. The song is set in Bhairavi raga and Adi tala. The lyrics and the meaning are presented below.

Charanam
The One who after abandoning his naughty pranks, wearing all kinds of ornaments
And is sitting in front of innocent Yashoda.

The One who Inspite of governing the entire universe,
Sits so beautifully posing as though he knows nothing!

He offers His mighty hands to protect the devas,
Yet holds the hands of the innocent people of Vraja to take his baby steps,

He terrifies and destroys the demons
Yet, runs away from monkeys and hides behind his mother!