Defining the nature of a Mahan (a Realized saint, a Mahatma) can be as challenging as cracking an ‘open secret’. 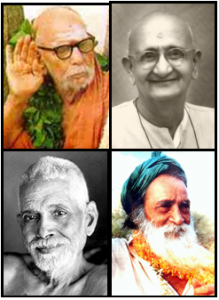 “Gurosthu mounam vyakyanam” it is said, to show how the Guru Dakshinamoorthy gave upadesa to His disciples. And how was that advice? It was in complete and prolonged silence. Silent communication? While that is profound and beyond our grasp, one thing is clear. Delivering us from a world of organized chaos to the world of eternal happiness has got to be done only by such Mahans. Only they can show us that eternal happiness isn’t after all an oxymoron, though everything about understanding the Mahans’ own nature certainly is.

Our scriptures teach us that there are infinite ways to reach God. Then shouldn’t the ways in which the Mahans—the ones who actually show us those infinite ways—teach us, also be infinite? In their teachings, in their nature, in their external characteristics and behavior, they are so varied that we cannot define their traits. And who are we to define them anyway? They have attained the purpose of life and, merely out of compassion, they choose different means to show us the path to Eternity. (Conversely, being merely indefinable or having a large following does not make one a Mahan. As a caution, it is best for us to not go in search of Mahans ourselves, for one can be easily fooled; but rather to go in search of God, who would then connect the genuine seeker with a genuine Master, as our scriptures promise.)

But however hard it is to define their nature, the scriptures and Mahans themselves have given us clues to identify the lakshanas (characteristics) of a true saint! “Unmatha, mookha, jadavath” says Srimad Bhagavatam in describing them; meaning they may appear ‘crazy, dumb and inert’.  That is, crazy with love for God, muted by the Lord’s splendor, and inert as they are lost in the bliss of His glorious persona. Bhagavatam also says that they will forever be “shrunvanti, gayanthi, grunanthi”, that is, they will always be either listening to or singing or talking about the glories and names of the Lord.

Once a group of people approached Sri Chaitanya Mahaprabhuji and asked Him about the lakshanas of a bhagavata (a true devotee of the Lord). Mahaprabhuji said, “Anyone who has said the name ‘Krishna’ once in their life is a bhagavata!” The people were not very convinced with this.  So the next year, they once again met Mahaprabhuji and posed the same question. This time the answer was, “One who chants His Names all the time is a bhagavata thara (devotee of a high order)”.  This was somewhat satisfactory for the questioners, but the subsequent year, they posed the same question again. The third time Mahaprabhuji said, “The one who, by their mere presence, inspires others to say the name of Krishna, is a bhagavattotama (the highest devotee)!” Thus Mahaprabhuji himself defined a characteristic of a Mahan.

In truth, only a Mahan can understand the nature of another Mahan. We can never understand, or even identify them by, their look, actions, talk or garb, because they themselves are masters in disguise who choose to reveal themselves only when they wish and to whom they wish.

However, they shower their blessings and grace on everyone. Hence we should be very careful because every action of theirs, even those we may consider meaningless or routine, serve a definite purpose and by ignoring or judging them, we could be blocking the flow of their grace on us.

Once a devotee went to have the darshan of the great mahatma, Yogi Ramsuratkumar. He took with him some fruits that he wanted to offer to Yogiji. When the man went up, Yogiji immediately picked up a different fruit himself and held it out for the man to take. But the devotee playfully insisted that Yogiji take his own offering first. Yogiji however continued to hold out his prasad and insisted that the man take that first. But the devotee was adamant that Yogiji should accept his offering first. Despite several attempts by Yogiji to have the man take the prasad, the devotee did not budge. Finally the devotee left the ashram without taking the prasad. Yogiji later commented that the prasad was given to save the man from a grave danger, but the man’s stubborn nature had cost him the blessing.

Mahans, in their incomprehensible nature, give their blessing in many ways that are often imperceptible to us. They can easily see our entire past and future, and know what’s best for us. Even our most rational thoughts should not cloud our judgment when we deal with Mahans. It is best to simply follow their instruction ‘to the T’, for, all their actions and advice are only for our benefit.

Understanding that such surrender is very difficult for us to exhibit, it may help our progress if we understand, not the Mahans’ entire nature, but simply their compassion. The very fact that Mahans are in the midst of our grimy worldliness, is indeed a great miracle. For those who would prefer to ever be in the state of divine inebriation, what is their gain in engaging with us? They benefit nothing from our interaction. It is only out of their compassion that they strive to relieve us from worldly entanglements. If nothing else, at least out of gratitude, should we not remain humbly in their presence and follow their words exactly?

3 Responses to "Mahans: Incomprehensible, but Accessible"