The following article is from Ardenwood, CA Gopa Kuteeram center, on the story of  Maharishi Valmiki. 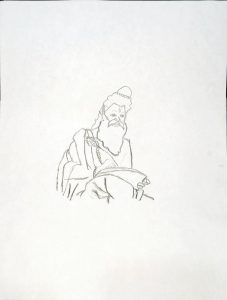 There was a robber named Ratnakar, he hunted for his family. He did not go to school. He earned food and money to take care of his family by doing robbery. Once he saw Sage Narada who was chanting,”Narayana Narayana”. He did not know who that was. He thought he could go and steal some money from him. When he came to Narada, who said I only chant Bhagavan’s nama and have this veena only to give and nothing else. When Narada asked Ratnakar, “why are you doing this robbery?”. Ratnakar replied, “I am doing to provide food and shelter to my family”. But, your family would not take your Papah of hunting animals and doing robbery. Ratnakar said he will go and ask his family members. When Ratnakar asked his family members to take a share of his Papah of hunting and robbery, everyone said no.

When Narada passed the same place after a thousand years, Ratnakar was chanting sincerely with his eyes closed in between anthills. Narada helped him out, addressing Ratnakar as “Valmiki”. Narada explained, in Sanskrit, Valmiki means anthill. Also, he said since you were chanting sincerely for thousands of years without knowing that you were covered with an anthill, you got that name. Even though Ratnakar was chanting “mara mara mara” instead of “Rama Rama Rama”, Lord Rama was pleased with his devotion and blessed him with all the knowledge and wisdom. A hunter and robber Ratnakar, turned into “Maharishi Valmiki” and wrote the epic “Ramayana” which consists of 24,000 shlokas and 7 cantos.