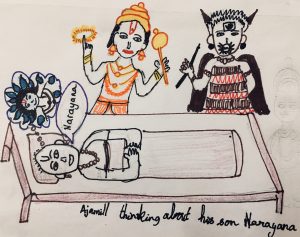 Long ago there was a bramhin by the name Ajamila. He was very dutiful and worshipped the lord everyday. He was well – versed in the vedas, very truthful, and pious. He was married to a good brahmin girl and led a happy life. One day he was walking through the forest collecting items for his daily puja, he saw a woman he was attracted to. He went away from his wife and children and started living with her.

When one has bad company, they lose their good habits. Ajamila, who used to be so virtuous, gave up worship entirely and spent all he had on his new wife. When he did not have enough money, he would rob people to keep his new family happy. He had ten sons with his new wife, but he had a favorite out of all of them. His youngest son, Narayana was his favorite. When Ajamila’s time came his son was playing not far from him. Ajamila sees the two scary looking messengers of Yama Raja, with their swords and clubs, he gets scared and calls out his son’s name. “Narayana ! Narayana !” .

When he called out for his youngest son, he uttered the lord’s name in his moments of death and without him knowing his mind thought about the lotus feet of the lord. Soon, two attendants of Lord Vishnu appeared. They asked “Where do you want to take Ajamila, to Vaikunta or Naraka ?”. Yama’s messengers replied, “Even though he meditated upon the lord in his last moments he has committed many sins throughout his life so therefore he should be taken to Naraka (Hell).”

“Ajamila has chanted the lord’s name and those who surrender themselves to him are cleared of the burden of their sins. That is the power of Narayana’s name !” Vishnu’s attendants replied. When the arguments of Vishnu’s attendants had surpassed Yama’s attendants, they left and went back Yama Raja.

They told him about what happened on earth as they went to take Ajamila’s soul away. Yama Raja smiled and said “Even though I have the power to punish souls there is one who is above me, that is Lord Narayana. Chanting the lord’s name is bhakti yoga and it is the easiest path to the lord. Ajamila said it just once and was cleared of all his sins and saved from me. Bhakti yoga grants people, Mukti, Moksha and release from the bondage of Karma.

Ajamila was so overwhelmed listening to the conversation of the divine messengers and he
contemplates everything he had done in his life. He slowly regained his health and became a great Vishnu Bhaktha and left his family and went to meditate on the lord on the banks of the Ganga. This time Ajamila gave up his physical body and went to Vaikuntam.

Ajamila Charitram is known as the crown jewel of the Srimad Bhagavatham and shows us the power of chanting the lord’s name. This incident from the Ajamila Charitram shows us that one can redeem his sins by thinking of the lord with true devotion.
In response to Parikshit’s question of how one can redeem themselves of their sins, Sri Shuka Maharishi says that “ Chanting the lord’s name relieves us of our sins and purifies our thoughts”.