Bhakti (devotion) is intense love for the Lord. There are two pillars for bhakti. One is Kirtanam (singing of the Lord) and the other is Katha shravanam (listening to the Lord’s glories).

Amidst all the different paths to attain the Lord, if there is a path that is sweet, simple and easy it is bhakti.

Its only through bhakti that God becomes easy to attain.

Bhakti is not only easy but it is very sweet, both for the devotee and for Bhagavan, who becomes highly pleased with bhakti.

What we do (in Sri Swamiji’s satsang) is Namasankirtanam and bhajan; what some great saints have done is nadopasana. How do nadopasana and bhajan differ?

What is a mantra? Bringing together aksharas (letters/syllables) in a specific permutation and combination is a mantra. It has a meaning and a phala (result). Mahans have not formed these mantras with their intellect; instead they have grasped these mantra sounds from space and given it to us through their experience (anubhava). Most of these mantras have strict rules associated with them on how to chant, where to chant, etc.

However the very many rules and regulations that are there for these mantras are not there for stotras. We do puja at home. We light a lamp and chant a sloka, say the Kanakadhara stotra, standing in front of God. That is fine.

Singing a namavali is also bhajan. Or singing kirtans of Mahans in a simple way to the extent that we know is also kirtanam. Even Sri Thyagaraja Swami has sung several simple kirtans. When we sing these, we call it Divya nama kirtanam. In Divya nama kirtanam, a song like Chakkani raja margamu will not be sung. In bhajan, we take up songs that can be sung easily.  It will suffice to sing in a simple way. 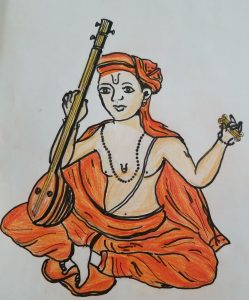 But nadopasana is one that has swara nirnaya (swaram as its basis). Like the mantras. Maharishis have given us mantras by bringing together letters.

In Sangeetha shastra there are only seven swaras, i.e., Sa, Ri, Ga, Ma, Pa, Da, Ni. Mahans have made these 7 swarams into several permutations and combinations, forming the 72 mela kartha ragas and their janya ragas, and thus have done nadopasana. Here bhavam alone is not important, but swarams are too. So the kirtans of all those Mahans who have done nadopasana, all have swara nirnaya. Swarams were there before the song arose.

A good teacher would teach only the swaram first before teaching the sahityam. As there is swara nirnaya, the kirtans of Sri Thyagaraja, Sri Muthuswami Dikshitar, Sri Shyama Shastri, cannot be sung differently by different people. Everyone has to sing it only in that particular swaram. There is place for manodharmam, but no right to change the swaram.

In this same holy Tiruvarur, where Moksha is attained simply by being born in that kshetra, the musical trinity of Shyama Shastri, Muthuswami Dikshitar and Thyagaraja Swami were born. These three did not do bhajan but they did nadopasana. They did aradhana (worship) of God through sangeetham (music). In their case, sangeetham was a spiritual path to worship the Paramatma and attain Him. This is nadopasana.

Namasankirtanam, on the other hand, is the singing or chanting of the Lord’s Names.  Sometimes people do bhajan playfully or in a competitive way. How can anything spiritual be earned out of such playful singing of kirtan? But even such people will nevertheless cross over the ocean of Samsara, just as Ajamila did, because of the greatness of Namasankirtanam!

When we say that we must do Namasankirtanam, one may question, ‘I do not have good voice; I do not have knowledge of music; I do not know how to sing a ‘raaga’, etc.’

But Namasankirtanam really means saying ‘eka Nama’ of the Lord, i.e., singing a single Name of the Lord. This is the best way to do Namasankirtanam. But only those who have a one-pointed mind can sit for hours together and sing or chant a single Name of the Lord. Since we are unable to do this, we sing various kirtans with raga and tala. Only then are we able to sing for some 3 or 4 hours without getting bored. One need not have any special knowledge of music for this. Only ‘bhaava’ matters.

In nadopasana one should sing properly; they should have knowledge of music and its nuances. Such people sing particular ragas in the morning, afternoon, evening.

Nadopasana, like mantra avritti, can be done by a few chosen for that path by Bhagavan and Guru. Namasankirtanam, which is singing and chanting the Divine Name, is a lofty but simple spiritual path shown by Bhagavan, our scriptures and the Guru, for the benefit of everyone, including us!