On Monday, November 18th, 2013 at 8PM, Sri Ramanujamji started the first of his two-talk Bhagavatha Dharma discourse series at the Seattle Nama Kendra.  The second talk was delivered at a Hanuman Mandir the following day.  Around 25 devotees had gathered eagerly to listen to Sri Ramanujamji.  To start off the proceedings, there was 20 minutes of Mahamantra chanting.  Following this, the children of Seattle G.O.D. Gopakuteeram, who had been learning Gajendra Sthuthi, recited the same.  Subsequent to this, Sri Ramanujamji delivered his lecture explaining how simple and enjoyable the path of devotion is and that the path of devotion is better and more pragmatic in this Kali Yuga. Sri Ramanujamji stressed on the importance of Satsang and concluded the pravachan by explaining the meaning and process to surrender all indriyas to Lord Krishna – “Kayena vacha manasendriyairva Buddhyatmana va prakrite swabhavath Karomi yadyad sakalam parasmai Narayanayeti samarpayami”. All enthused devotees then sang a portion of Kaliyaiyum Bali Kollum.  The event then concluded with prasadham along with Sri Ramanujamji surprising the children with gifts to show them his appreciation of them learning Gajendra Sthuthi.

Sri Ramanujamji continued the two-talk Bhagavatha Dharma pravachan series at the Hanuman Mandir in Burien, Washington (around 10 miles away from Seattle) on Tuesday, November 19th, 2013 at 8PM. Around 50 devotees had gathered to come listen to the nectarine words that flowed out of Sri Ramanujamji.  He talked about the early stages of bhakthi and how one progresses through the different stages.  Sri Ramanujamji explained that  bhakthi when done out of gratitude can lead  to a wonderful transformation within one as opposed to being done with a desire in mind.  After listening to Sri Ramanujamji’s inspiring words, there were a couple of bhajans that were sung followed by harathi and prasadham. 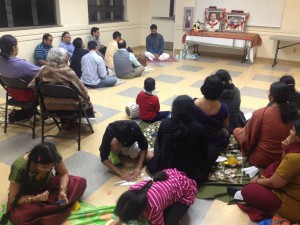 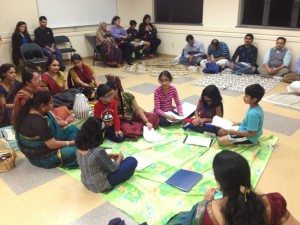 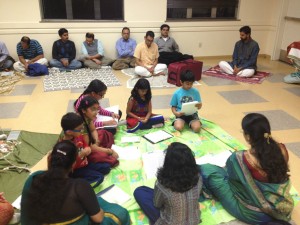