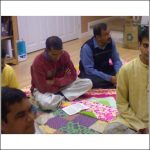 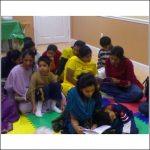 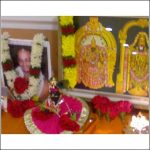 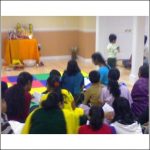 This was followed by a short and inspiring speech on the greatness of satsang and glory of Mahamantra kirtan by Sri Narayananji. He re-iterated the sayings of Mahans that human birth is rare. Rarer is to have a quest for jnana (mumukshatva). He said, ” Rarest is to get into the satsang of a Mahapurusha. The life of bhaktas like Druva, Prachetas etc goes to show that when the quest for God is true, He comes in one’s way. Rudragitam sings the glory of mahans and Gurus, who show one the path to God. As many people, so many paths. Which one of these paths do the Mahans show? They show the path that is most practical and best suited for this age – and that is Namakirtan.  Vedas are endless. Their essence is in puranas and it is said that Srimad Bhagawatam is the essence of all puranas. The point that is re-iterated in Srimad Bhagawatam is Namakirtan. Vishnu sahasranama contains 1000 names of the lord and finally has a slokam that says that Rama Nama contains all the 1000 names. So also, the essence of all Vedas is Nama.

This is called Mahamantra because it bestows one with everything starting from mundane pleasures all the way up to liberation”.

Citing examples of people who have been benefited by Mahamantra, Sri Narayananji said that chanting Mahamantra atleast 10 times in the morning and 10 times in the evening, will bring about a great difference in one’s life.

Just as the words of the song “Kaliyayum bali kollum” meant, about 30 people including children were blessed to take part in the satsang and listen to the glory of Nama against the odds of heavy ice storm that struck New England on Thursday and Friday.

All the devotees resolved to chant Mahamantra. The satsang concluded with Mahamantra. Sri Raviji performed the puja and the Prasad was distributed.