Purity. This beautiful word is generally linked either to physical or moral standing. But there is one other kind of purity that does not come by easily.

There is an episode narrated in ‘Ramana Periya Puranam’ – (Inner journey of 75 old devotees) by Sri. V.Ganesan, where Bhagavan Ramana Maharishi speaks of a different kind of purity. 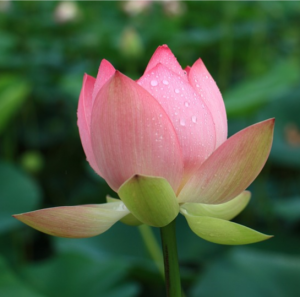 ‘Ratnammal was a young dancer who was looked down upon by society. One day, Ratnammal saw some urchins throwing stones into Pathalalinga (the underground cave near the Arunachaleshwara temple in Tiruvannamalai where Sri Ramana Maharshi sat for months in samadhi as a young boy). She went inside and saw a dim figure sitting with a faint halo surrounding it. Concerned about how this young ascetic could sustain himself, she brought food and fresh clothes and left them at the entrance. Her offerings remained untouched as Bhagavan Sri Ramana was lost in samadhi.

Later, Seshadri Swami discovered Bhagavan, brought him out and instructed the temple priest to give milk to Bhagavan. This priest brought milk, not from Father Arunachaleshwara’s shrine, but from Mother Apeethakuchambal’s shrine next to His. This milk – that had been poured on Mother’s shrine along with turmeric, soap nut powder and ghee – was the first prasad the Mother gave him. As Bhagavan was still in samadhi and not outwardly conscious, the priest opened his mouth and poured in ‘Mother’s milk’ – the first food that sustains.

After Bhagavan resumed body consciousness, he later stayed under an ‘illupai’ tree in the temple premises where he remained in samadhi, only rarely coming to outward consciousness.

Once, when Ratnammal was on her way to a dance performance, she noticed Bhagavan seated there. Turning to her mother she said, “I will not eat until we have served this ascetic some food.” They tried to wake Bhagavan up but in vain. So they opened his mouth and put the food in. They did this many a time. Sometimes he would swallow it. At other times the food would remain in his mouth and they would clean it up the next day. Bhagavan later on said, “This is the Universal Mother represented by Ratnammal.”

He also once told Suri Nagamma, “Ratnammal was pure.” Bhagavan has never used such a description for anyone but Ratnammal. He explained that this was not a moral or physical purity he referred to, but to the fact that even in those days she had the capacity to RECOGNIZE the divine before her.’

To recognize the divine! How pure must one be in all senses to be able to perceive divinity somewhere or in someone?

“Positive vibrations” is a buzzword these days, and many profess to feeling it in quiet, peaceful places. But that clichéd phrase is not what we are talking about here.

‘Avatara purushas’ (incarnations of the divine) walk among us; sent to this world by the Lord Himself, to shower His grace on us. But how often do we recognize that divinity? In fact, most of us are the opposite. Let alone being unable to recognize divinity in an unknown person, we even cast a shadow of doubt on the words and actions of saints who we know are divine!

Yet there are some simple people in this world who have the innate capability to recognize divinity. It is they who are truly pure.

Once, many years ago, our Guru Maharaj HH Sri Muralidhara Swamiji – who was then largely unknown to the world – visited a handicraft store. An old salesman who worked there offered to take him to the upper floor in an elevator. But as soon as the elevator doors closed, the man locked it and fell at Sri Swamiji’s feet, praying that he should bless him with his grace. Now how the man, who was not acquainted with Sri Swamiji, knew that Sri Swamiji was someone capable of blessing him, is anyone’s guess. But he obviously possessed the same purity of perceiving the divine that Sri Ramana Maharshi spoke about.

The ability to recognize true divinity is not an attribute of the eyes. That is why thousands fall prey to pomp and show, mistaking it for divinity; and millions more even refuse to believe there is something called divinity.

The purity that enables perception of divinity is an attribute of the heart, the soul. And it is the treasured wealth of very few in this world.