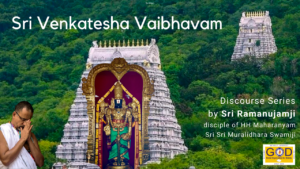 We shall now enjoy a few divine droplets from the third episode of this series.

Bhagavan’s Love for His Bhaktas

Divyadesa Vaibhavam is a work that is a bouquet of various fragrant flowers that extoll the greatness of Sri Srinivasa Perumal, picked from the lovely gardens of the 18 puranas. They have been meticulously collected, decorated and arranged beautifully by Paranur Mahatma Sri Sri Krishnapremi Maharaj. Mere listening or reading Divyadesa Vaibhavam itself, very easily grants one the fruit of taking the actual journey to these various teerthas and kshetras.

In our previous episode we saw how Sri Srinivasa Perumal embarks on this pilgrimage of descent to attain his own divyadesam – Tirumala. To undertake such a journey, even Bhagavan seeks a guide, an acharya, who here is none other than the great bhagavata, Sri Narada Maharshi.

In the story of Dhruva, Narada Maharshi himself blessed him with the Vasudeva Mantra, taught him how to meditate and brought Paravasudeva, Bhagavan in front of him. Bhagavan came down on a journey chartered by Narada Maharshi and blessed Dhruva. However for normal jeevas like us, Narada Maharishi’s compassion is multifold; he chalks a pilgrimage of descent from Bhagavan’s abode, the milky ocean to verily our physical realm, amidst us, as archavatara Perumal. Bhagavan too desires to bestow His infinite compassion on the people in this age of Kali and He fulfills this through the prayer or ‘preraNA’ of an Acharya purusha.

Narada Maharshi standing before the Lord of the seven worlds, filled with a deep sense of awe and gratitude, begins to extol Him. This is the state of a true devotee who cannot help but praise Bhagavan remembering His mercy, His grandeur, His majesty and compassion. He even tends to forget his own prayer but is totally immersed in praising Bhagavan. So Narada Maharshi begins by recounting Bhagavan’s lovely grand qualities – from the quality of greatness (mahima) to the quality of sweetness (mAdhuryam). All these wonderful divine qualities (guNAs) flocked and gleefully found refuge in the divine abode of Bhagavan (samasta kalyaNa guNAbhirAmam) eagerly awaiting to serve Him.

Narada Maharshi goes on to expound as to how Bhagavan has been the sole protector at all times. “paropakArArtham idam shareeram” says our shastras and Sri Srinivasa Perumal clearly espouses this principle that the body is for the service of others (paropakArArtham idam vapuste) to the extent that he befriends even the lowly (deenabandhu) running to their aid.

Every incarnation of Bhagavan proves this. He was the one who protected Veda mata – the divine intelligence. Veda mata is the foundation for dharmam and mangalam. Dharma means right conduct and the fruit of dharma is mangalam (auspiciousness) which is moksha or liberation. Veda mata shows us the direction and the destination; both the means and the end.  All the deities find their place in Vedas, but when the asuras Madhu and Kaitabha robbed the Vedas during the time of creation, it was only Bhagavan who went to her rescue. It was Bhagavan who retrieved and protected the Vedas. Hence Narada Maharishi concludes by saying, Bhagavan alone is Veda Murti and that he would sing His glories alone!

Sri Swamiji also echoes the same bhava in one of his madhurageethams wherein he sings,

“nin pugazh pADuvadanDri vERoru vElaiyaRiyEn – vEda mUrtthE” –
“Oh Veda Murte! I do not have any other work apart from singing your praises”

Singing the praises of Bhagavan is the essential teaching of the Vedas . Our Sri Swamiji in yet another madhurageetham “bhagyam ullore vArungal ” says that Sri Hari’s name is the essence of Vedas (vEdatthin sAram hariyin nAmam). So the real Veda Murti, the One whose intelligence is Veda Mata, the One who protects the Vedas, the One who preaches the Vedas and the One who is shown by the Vedas is Srinivasa Perumal. Since Vedas show us this path of singing Bhagavan’s glories, Sri Swamiji in this kirtan very beautifully says, “I know of no other occupation other than singing Thy praise.”

The great Yamunacharya also in Stothra Ratna says, “No vaidika (worshiper of the Vedas) would ever refute the fact that when Veda Mata was under siege Sri Srinivasa Perumal alone had been to her rescue so that the pramANa – the means of knowledge – is protected.”

When the earth was drowned in the causal waters, Svayambu Manu pleaded to Lord Brahma for a dwelling place to perform karmas and offer oblations to all the deities. The devas themselves could not help Manu. Bhagavan, took the form of ‘Adi Varaha Murti’ and uplifted Booma Devi. To this day, by His divine grace the world is held in perfect position with a fine balance of cosmological constants ensuring ample sunlight, perfect rotation of seasons and correct balance of days and nights sustaining our life on earth .

Narada Maharishi further goes on to say how Bhagavan, as Sri Kurma, bore the weight of the massive Meru mountain on His back just to secure the amrut (nectar) for the devas who, without the least sense of gratitude, shamefully succumbed to the torture of Hiranyakashipu and hailed his name. Bhagavan however incarnated as Lord Narasimha for his dear bhakta Prahlada Swami, tore apart Hiranyakashipu, and once again protected the devas.

Narada Maharshi recollecting this immense compassion and grace that Bhagavan showered on the devas through each of these three incarnations (Kurma, Varaha and Narasimha) calls him ‘deenabandhu’ and says; “Alas! You are so very compassionate!”
Each of these incarnations reveal a fraction of Bhagavan’s vast compassion and the totality of all these put together takes this wonderful form of our Sri Aishwarya Srinivasa Perumal!

Click here to go back to the Aug 2022 newsletter page:
https://godivinity.org/newsletters/nama-dwaar-newsletter-august-2022/