The Most Compassionate Avatar! – Relishing the Venkatesha Vaibhavam Series

We shall now enjoy a few divine droplets from the first  episode of this series.

The Most Compassionate Avatar! 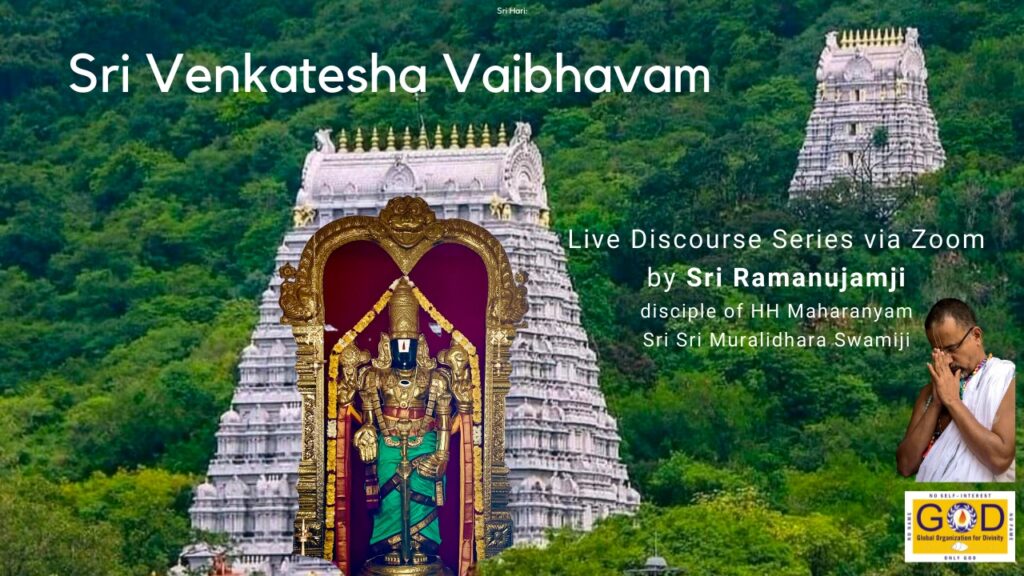 In Vaishnava Sampradaya it is said, Divinity is present in five states. First and foremost among these five states, is SrimanNarayana in Vaikunta. This is the Supreme state (param dhaama) and that which is beyond Creation and Time. In this state, Bhagavan is enjoyed only by a select few – the Nityasuris, who are ever present to serve the Lord in Vaikunta, and the Mukthas, the ones who attained liberation.

Therefore, in order to be more approachable, the compassionate Bhagavan then descended to ksheerabdi, the divine Milky Ocean (the second state of Divinity). Here, all the celestial beings are able to approach Bhagavan when they have a prayer. Yet, He is far from the reach of humans and other beings on this Earth.

To be approachable to all the beings on Earth, the compassionate Bhagavan, then came down as Rama, Krishna and various other incarnations. He, who is beyond the rules of this creation, took various forms, bound Himself by the rules of His own creation and spent time amidst us, with the sole intention to liberate us. Sadly, even this was not enough. Bhagavan could be enjoyed only by those who were born in the same place and during the same time as the avatara. Bhagavan is also present as ‘antaryami’ in each of us. Unfortunately, this too, is beyond our reach.

So, finally, He decided to take this most compassionate form – the form of ‘archavatara’ in temples! So even we ordinary humans are able to perceive Bhagavan, who is present as archavatara with our eyes, enjoy serving Him through various utsavs, approach Him when we have a prayer, and so on.

Among the various archavataras of Bhagavan that we see in various temples, the most special one is Sri Srinivasa Perumal in Tirupathi. He has descended specifically for this age of Kali and knows only to do ‘anugraha’ (blessing). When Bhagavan takes an avatara, he has at least two reasons- paritrAnAya sAdhunAm, vinAshAya cha dushkrutAm… Nurturing His devotees and to destroy those who are evil. But our Lord Srinivasa knows only to nurture and protect everyone. He does not do nigraha (destroy). Even when the most vile, sinful being comes in the presence of Sri Srinivasa Perumal, He only showers his mercy.

In the vibhava avataras (incarnations as Rama, Krishna, etc.), though merciful to sinners, Bhagavan’s forbearance had a limit. At some point, Sri Rama or Sri Krishna had to take action against the various evil forces. The forbearance of Sri Srinivasa though, has no limit. When a devotee comes in His presence, He reveals Himself to the devotee and speaks to the devotee. At the same time, when a thief comes with the wrong intention of robbing the treasures of Bhagavan, the compassionate One, who does not want to punish even the most wicked, stays quiet in his state of ‘samadhi’ and lets the thief get away with the wrongdoing.

One is left speechless and spellbound at the extent of the Lord’s compassion. It is because of this compassionate nature and the forbearance of Bhagavan’s archavatara, that we are able to approach Him. If Bhagavan decided to punish us for our excesses, can we even go near Him? In this world, if there is a leader, everybody around him changes his or her schedule to fit the leader’s schedule. We do not let the important person wait. Yet, when it comes to Bhagavan, the One who is the Lord of the Universe, we take liberties. There are so many instances where the Lord of the Universe as archavatara is made to wait, with just a single cloth on Him, until the donor of the abhisheka arrives. Despite being the Lord of the Universe, He waits patiently!

Each archavatara of Bhagavan has some unique qualities. When we approach Him aligned to those qualities, then we can be the recipient of His complete grace. Azhwars and various mahatmas show us how to approach each archavatara Bhagavan. In the case of our dear Sri Srinivasa Perumal, all Azhwars and Mahatmas have cried out to the Lord and surrendered themselves completely. It is because He is the sole refuge for this entire universe (jagatAm sharaNyam…). Right from a small ant to the mighty Lord Brahma who has created this universe, everyone surrenders unto Him.

If a poor man wants money, then he would go and beseech a wealthy man. He will not approach another poor man and plead him to give money. Similarly, when one surrenders, the person to whom he is surrendering should be capable of protecting and fulfilling his prayers. Who else can be more apt for surrender. than our Sri Srinivasa? He is the Lord of the Universe. Everything is under Him. So, He protects us from the various afflictions. And, since He is “Shri Nivasa” – the abode of Goddess Shri Herself, He bestows all auspiciousness. In fact, all that bestows auspiciousness and abundance in this world, be it the wish-fulling Kalpavruksha, Kamadhenu, Chintamani, Amrutha, etc., appeared out of the Milky Ocean, the birthplace of Goddess Shri. And this Milky Ocean is the abode of our Lord Srinivasa! Thus, be it worldly or spiritual prayers, He fulfills everything!

Lord Srinivasa, the fulfiller of all our prayers, the sole refuge for all, the ever compassionate One who always bestows His Grace, has now further showered His compassion. Instead of expecting us to come to the land of Bharat, to have His darshan, the Lord of the Universe has crossed the seas and come to us. He is now standing in Houston, to bless us all in North America, in the form of Sri Aishwarya Srinivasa!

To listen to complete Episode 1 of the series – https://youtu.be/2PrQx0zKlso

Click here to go back to the May 2022 newsletter page:
https://godivinity.org/newsletters/nama-dwaar-newsletter-may-2022/