Reminiscing the Wit and Wisdom of Sri Chandrashekhara Bharati Mahaswamiji 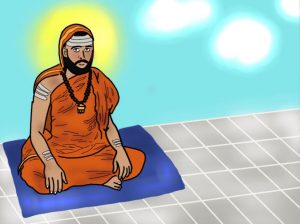 Mahaswamiji’s birth was as beautiful as his life since he was born as a blessing received by his mother from a prior pontiff of Sringeri.

He was born a jnani. One day during his childhood, Mahaswamiji’s mother sent Him to buy some things. He was chanting the Mooka Panchashathi stothram, as he walked to the shop. His chanting was so intense that he lost all awareness of his surroundings. He went past the store somewhere else. A family friend stopped him and asked “Where are you now?” Mahaswamiji replied, “I am in the 58th shloka.” Such was his focus!

Growing up, Mahaswamiji desired that his Guru should give him sanyasa. He came to Bangalore Chamarajpet and began vidyaabhyasam (education). Unfortunately, his Guru attained siddhi, before granting him sanyasa. The administrators of the Math and pandits decided that Mahaswamiji should get sannyasa and become the next pontiff of the Sringeri Peetham. Then 13 years old, Mahaswamiji replied, “Please give me sanyasa, but I don’t want to be pontiff.” Such was his humility.

Several years later, one day during chaturmasya (four months in a year, when sanyasis stay in one place), Mahaswamiji was giving upanyasam on Sri Adi Shankara’s Vivekachudamani. Many devotees came regularly to listen and have darshan. Chaturmasya ended, and Mahaswamiji began his journey to another city continuing his Vishvarupa yatra. A devotee who attended his lecture daily started crying.

Mahaswamiji asked dearly, “Why are you crying?”

The devotee replied, “During this chaturmasya, I was blessed with Your darshan daily. You are now leaving this city. I cannot bear this separation.”

Mahaswamiji replied, “You shouldn’t be crying, I should cry.”

Hearing this, people wondered why he was saying this.

Mahaswamiji continued, “During this chaturmasya, I have lectured on Vivekachoodamani, a Vedanta Grantham daily, saying that the Guru is not limited to a 5 or 6 foot body. He is ‘Akhanda mandalakaaram’, i.e. He pervades the Universe. For months, I have been saying that the Guru is Atma Swaroopam! But I have failed to teach you! That is why I should cry.”

Sri Guruji also narrated another incident when one devotee asked Mahaswamiji, “Will I get jnana?”

Mahaswamiji answered, “Why are you doubting that?”

The devotee replied, “I don’t know Sanskrit. Without knowing Sanskrit, how can one read and understand Shankara Bhashya? Without understanding that, how can one attain jnana?”

Mahaswamiji replied, “Did Adi Shankara get jnana by reading Shankara Bhashya? Jnana can only be received by the grace of Mahans.”

Just then, a person who was nithya-agni-hotri (one who performed prescribed fire rituals daily), came up to Mahaswamiji.

He asked him, “Is your agnihotram (daily worship) going on well?”

Hesitatingly, the person replied, “No Swamigal, I couldn’t continue.”

“There is no dried cow dung to be found!” the agni-hotri responded.

Smiling, Mahaswamiji said, “Oho! In your city, do cows give milk only for coffee, but do not make any cow dung?”

Sri Guruji concluded the narration by saying that Mahaswamiji’s advice was always very sweet and even remembering such great Mahans was a great blessing!