Rishabhadeva is one of Bhagavan’s popular 24 avatars. His story or charitra is told in the fifth canto of Srimad Bhagavatam.

Svayambhuvamanu had two sons, Priyavratha and Utthanapada. Rishabhadeva came in Priyavratha’s lineage. Priyavratha’s eldest son was Agneedhra. Agneedhra’s son was Nabhi. Nabhi did not have any children at first, so he did a yaaga (sacrificial worship). Bhagavan was very happy with the yaaga, so He Himself came to bless Nabhi. When Nabhi asked Bhagavan for a child, Bhagavan asked him in return, “What type of child do you want?” Nabhi replied that he wanted a child like Bhagavan. Since there could be no one equivalent to Bhagavan, Bhagavan Himself incarnated as the son of Nabhi and Merudevi. That child was Rishabhadeva. 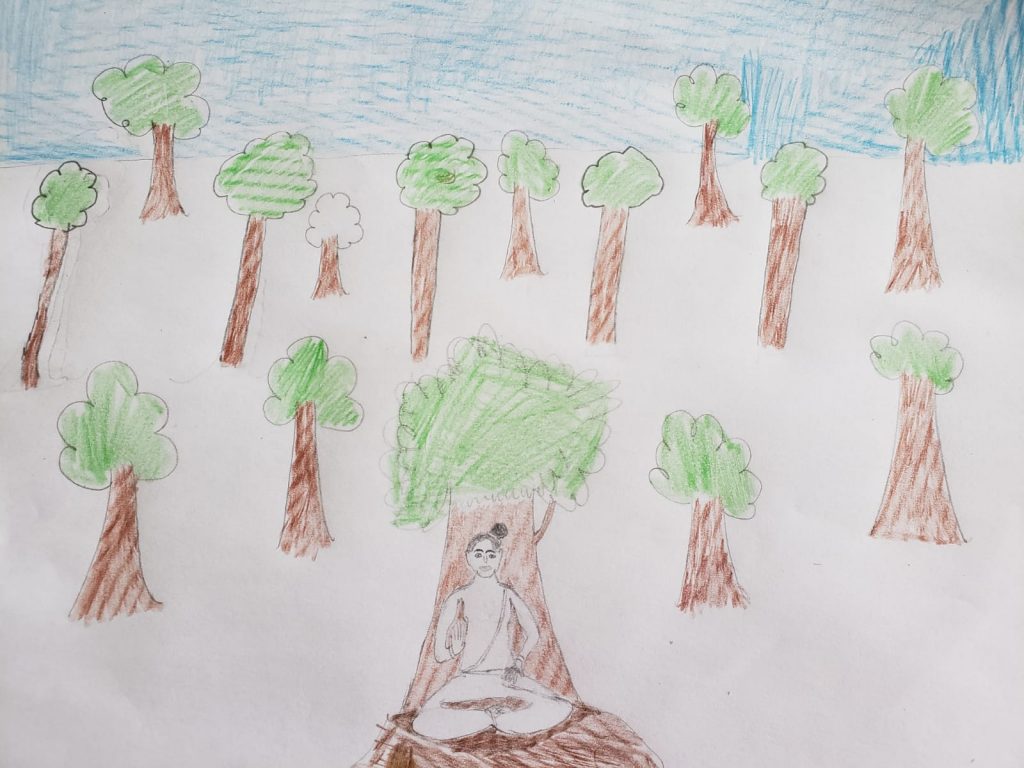 Every incarnation of Bhagavan has a purpose to fulfil. For example, Matsya avatar’s purpose was to protect the Vedas. Varaha avatar’s was to lift and resurrect Bhoomi Devi (Mother Earth) from the depths of the ocean. Rama avatar came to show the path of Dharma. And Krishna avatar came to show prema bhakti (divine love). Similarly, the purpose of Rishabhadeva’s avatar was to show paramahamsa dharma or the way of life of Self-realized souls (jeevan muktas or jnanis).

A glowing jnani from birth, Rishabhadeva was cherished dearly by his parents. Out of jealousy, Indra refused to let it rain in Rishabhadeva’s kingdom. Rishabhadeva understood Indra’s jealousy, and gave a big smile. That smile itself brought rain to the land.

Indra felt bad about what he had done and decided to give his daughter Jayanti in marriage to Rishabhadeva. Rishabhadeva became king and ruled the kingdom for many years. He had 100 children. His eldest son was named Bharata, who became a great king, and after whom the land of Bharatavarsha was named. Of the remaining 99, nine became great, realized souls known as the Navayogis. Another nine became kings of the nine islands of the world (the navadweepas), and the remaining 81 became brahmanas who were experts at performing sacrifices and ritualistic ceremonies.

The teachings of Rishabhadeva are important to this day. He explained dharma to his sons and that became his upadesa (advice) to us. One of his main teachings is that understanding Bhagavan as the ultimate goal and surrendering to Bhagavan should be one’s priority. He also said that the one who shows us Bhagavan is our true guru. He said the role of a father and mother is to show Bhagavan to their children. Another one of his teachings is that Sadhu seva or taking care of bhagavatas (devotees) is the path to reach Bhagavan. Rishabhadeva said that bhakti will blossom only when sadhu seva is performed.

Rishabhadeva later handed the throne over to his eldest son Bharata and retired to the forest. He lived his last years in the forest as a wandering recluse. Ignorant people considered Him to be idle, blind, deaf and dumb, like a ghost or madman, but He was unconcerned about his body or surrounding circumstances, and remained absorbed in the supreme bliss of love of Bhagavan. Finally He left His mortal body in a forest fire and ended this avatara.