In Srimad Bhagavatam, Krishna, in his final sermon to his favorite devotee Uddhava, discloses to him the secret of satsang.  Yoga, righteousness, penance, charity, social service, sacrifice, vows and austerities, holy Texts, and the list goes on!  Before we jump to conclusions, here is the not-so-fine print in Krishna’s words – none of these are satsang!   Interestingly, rather than giving a multi-line definition of the term ‘satsang’, Krishna defines satsang through examples.  He cites a host of devotees who had attained Him through merely satsang!  And leaves it to Uddhava to decipher satsang! 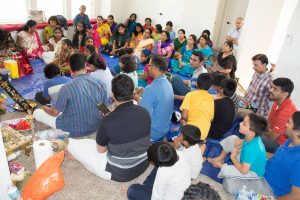 For the uninitiated, the Satsang (sat-divine, sangh – company) is simply a place where there is constant Nama Sankirtan (singing the Divine Names of the Lord) and Katha Shravanam (His divine glories are recounted) without any dose of worldly gossip.  Krishna’s examples in this category are umpteen – birds, animals, demons… the list goes on.  Such a satsang is not about miracles, about instant cures, about emotional shake-ups or about prayers being answered instantly…. The association does start as a social meetup but slowly brings about clarity and purpose in an otherwise clouded mind.  To start with, it is often ‘boring’ and frustrating to chant the Divine Name repeatedly, but perseverance is paramount.  Only later does the mind realize that it is not the headcount of attendees involved that makes a satsang good; it is involvement that counts.   The power of His Divine Name and His Divine glories act on one’s being and usher in an inner transformation.  Know that it is divine grace at play when one is able to routinely attend such a satsang and develop love for His Name and His Leelas.  This very ‘attachment’ and a quest for more, leads him to a more qualified satsang – the satsang with a Mahatma – a realized soul – the Guru.

Sugriva, Vibhishana, Jambavan are a few of Krishna’s examples, who attained Hanumanji’s divine satsang.  Such a satsang is indeed a new chapter in the seeker’s life and there is no turning back.  In the abode of the realized soul, especially if the seeker is gifted enough to be chosen by a living Guru, his pre-existing faith is not shaken but rather, strengthened; his mistakes and follies are not taken advantage of, but rather his positives are focused on.  He is taken aback that he is not asked to changed demeanor lifestyle or food habits.  He realizes that contrary to his expectations, he is never put to rigorous spiritual practices but is encouraged to continue with chanting the Divine Names more and more!  It is the same Nama Sankirtan and Katha Shravanam – but the persistent seeker gets a new meaning to these terms altogether.  His prayers being answered are no more miracles; they are now visible instances of divine grace.  In the presence of the Master, he gets to understand and experience pure, unalloyed love, unseen hitherto even within his close-knit family.

As one sails through such a satsang, both, in the presence of the Guru and at other times in the remembrance of his association with the Mahatma, catching hold of His instruction, he realizes that there are no more frustrations and complaints about mundane events in life; effortlessly the mind appreciates the gift of grace being bestowed on him through every incident and happening.  Looking back, he is pleasantly surprised that unnecessary strings that were attached to his life have now faded away even without his noticing and virtues and meaning added instead…and life is now a lyric!   Chanting is effortless and joy.  Mundane worldly love now becomes divine love for the Lord.  Now when someone asks ‘why chant Nama? Why do bhakti?’ – almost spontaneously comes the response – ‘because I love it’!

At the ripe moment, the seeker is duly bestowed with the ‘sat’-sanga – the association with the Lord, which is no different from the earlier state.  Vritrasura and the Gopis of Brindavan are Krishna’s examples.

Satsang does transform; transform for the good.  And this huge transformation starts with the miniscule seed of the Divine Name – ‘Hare Rama…’ Mahamantra, Rama Nama or your favorite Divine Name.

So look around, find a true satsang… and if you don’t find a group, the Mahamantra itself is your companion!  Embark on the journey.

2 Responses to "Satsang – The Redeemer"