“Yasya nisvasitam vedah” – Vedas are the breath of God or the Self, it is said. The Vedas, blessed to us by the Lord, stress on the fact that realizing God or Self is the ultimate purpose of life. These shastras describe the infinite attributes, powers, and characteristics of God. So what is that one attribute of God that stands out as the most benign and wonderful? It is the quality of “Prema” or “Unconditional Love”. 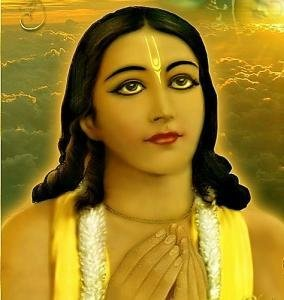 Is this love same as the love that a mother has for her son, a husband has for his wife, a dog has for his master? No, it is not love of the world but “Divine Love”. Now, how does a layman get to experience this Divine Love of God? The answer lies with the mahatmas who descend on this earth to carry out the Lord’s work. As sadhus are verily the shadow of God, we can easily comprehend the incomprehensible through them without even learning the scriptures. Just by having a sadhu’s satsang, the qualities of the omnipotent God can be understood.

Out of the infinite avataras of the Lord, only rarely does God descend with the attribute of Divine Love in totality. One such rare avatar is that of Sri Krishna Chaitanya Mahaprabhu. His avatara spanned only 48 years, but in all of those years the one quality of his that surpassed the rest was that of Divine Love. He showered only love and compassion wherever he went on everyone, irrespective even of whether they had bhakti or not. He took unto his fold great sinners such as Jagai and Madhai and transformed them into saints by showering them with pure love. In another incident, a young Mahaprabhu simply threw away his great treatise on Nyaya Shastra into the Ganges just to cheer and alleviate the disappointment of his friend, who had also written a similar but mediocre book on the same subject. Such was the great saint’s compassion!

Once, Sri Mahaprabhu was on a tour around the country. In a particular temple town that he was visiting, lived a leper by name Vasudeva. He was a humble, pious person who had contracted the vile disease and was forced to live away from society. A pungent, sickening odor used to always emanate from his body. Worms and other insects fed on the oozing pus and blood.  But Vasudeva used to pick up these worms that dropped from his body and place them back again on his wounds. He felt that he had no right to deprive the worms of their food.

On hearing that Mahaprabhu was in his village, Vasudeva went to have his darshan. But unfortunately he arrived late. When Vasudeva learned that the great saint had already left the place, he felt terribly disappointed. He fell down in a swoon and began to wail his heart out. Mahaprabhu heard the cry of Vasudeva and ran back towards him. Ignoring his physical condition, Mahaprabhu lifted Vasudeva in his arms, and hugged him. To everyone’s surprise, the disease vanished! Vasudeva regained his lost vigor and vitality. He fell at Mahaprabhu’s feet. He cried and submitted humbly, “O Prabhuji, people avoided me because of the odor around me. This was good as I was able to remain humble and remember the Lord at all times. I came here only to have Your holy darshan and definitely not to be healed. Now I fear that a healthy body will puff my pride and that I will forget the Lord!”

Mahaprabhu was overwhelmed with love for this man who put humility and the Lord’s remembrance higher than a healthy body. He consoled him saying, “O dearest Vasudeva! Lord Krishna’s grace is ever with you. You will never again be proud. Krishna is already very happy with you because of your humility and compassion towards all creatures including the tiny worms that fed on your wounds. Continue to repeat the Lord’s Names and spread the Lord’s glories everywhere.”

2 Responses to "The Compassion of Mahans"