On January 1 every year, His Holiness Sri Sri Muralidhara Swamiji conducts a Mahamantra Mass Prayer in a various cities in India. This year, the fortunate place was Coimbatore in Tamil Nadu. The event was attended by 5000 people and watched on the Web by about 75,000 people from 41 countries. Below are some excerpts from Sri Swamiji’s New Year message in Q&A form. 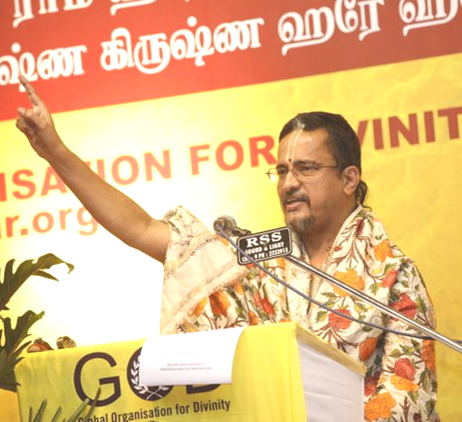 Why Mass prayers?
Sri Swamiji spoke as follows:
I go to many places to meet people, to pray for their well being and to pray for an early resolution of their problems. Sometimes in a casual discussion, I ask them, “What do you do when you are confronted with a problem whose resolution is beyond normal human efforts?”

I rarely come across anyone who says, “I shall pray to the Lord to resolve the problem by His benign grace.”

What a sorry state we have all come to! How sad that we have all forgotten the grand path of prayers relying on Bhagavan’s grace!

When I saw this ‘perversion’ in the minds of many, in order to revive the faith in prayers and to make them more powerful, Mass prayers were initiated from the year 2006.

The fragrance of a single jasmine is sweet, but when we make a garland or a bouquet with many jasmine flowers, the fragrance is even more potent and benign. So when people gather together and pray, the impact is many, many times greater than just praying in isolation.

Even though we (Sri Swamiji and the members of GOD Satsang) do Mahamantra Mass prayers all round the year, the mass prayer on Jan 1 is done on a grand scale every year since 2007. Jan 1 is indeed a special day. Way back in 1886, in the divine abode of Cossipore garden house, Sri Ramakrishna Paramahamsa was physically weakened by cancer. But despite this, on this very day, in the afternoon, he came down to the garden for a stroll. At that time, he became a veritable Kalpatharu (wish-fulfilling divine tree) and blessed all the devotees.

He said, “What more shall I say! I bless you all. Be illumined!”

All the devotees who were present there got all their wishes fulfilled immediately by the blessings of Sri Ramakrishna Paramahamsa. What Sri Ramakrishna did 125 years back as a kalpatharu, the Name of Rama and Krishna shall do this day as the same kalpatharu. The Mahamantra shall fulfill all the prayers of the people assembled here.

What do I pray for?

Sri Swamiji spoke as follows:
When I pray to Bhagavan what do I ask for?

I do not ask for liberation (moksha), nor do I ask for any yoga siddhis (divine powers). I ask no personal favors.

I only pray that He, out of his immense grace, should fulfill speedily ALL the prayers of you devotees who are in distress. None should leave this place empty handed. This is my only prayer.

Can we have materialistic prayers in our minds?

Sri Swamiji spoke thus:
Many people who are in the path of Nama sankirtan or are in the habit of visiting a temple or a mahatma regularly, also pray for relieving their problems. This is not kaamyaartha bhakti (‘temporary’ devotion with the aim of only having desires fulfilled, without real love for God).

With whom else can real devotees share their troubles and sorrows, and pray to for divine help but Bhagavan? Draupadi or Uttara, who were devotees of Krishna, could not do anything else but surrender to Krishna for help when they were in distress. That is certainly not kaamyartha bhakti.

If someone goes to a temple or to a mahatma only when they have problems and only to get relief from problems, only that is kamyaartha bhakti.

How powerful can prayers be?

We in Tamil Nadu and in another neighboring state were constantly troubled by the Kaveri problem spanning many decades. Whenever the monsoon failed, this problem would surface and many times take a severe dimension of violence, with loss of life on both sides. This was brought to my notice in 2007. We ordained a 48-day uninterrupted Akhanda Nama Kirtanam to pray for the water crisis to disappear in both states.

From that year onward, we seldom see this issue getting flared up. No one even sees this issue in the papers. This is a prayer by just about 100 people in one place. If this can bring about such a benign but drastic change, imagine the positive impact of mass prayers in many places, by many more devotees!

Sri Swamiji spoke thus:
Today I am going to give you all, as a prasadam, a 1-rupee coin. It has ‘1′ marked on one side.

This tells us: ‘God is One and Mahamantra is the one way for all to receive His grace.’

The other side has the Ashoka chakra. ‘Ashoka’ means ‘destruction of sorrow’, which is the immediate result of chanting the Mahamantra.

So I am giving you all this coin as a prasadam of this Mahamantra mass prayer so that your sorrows are destroyed by the One God, through this One way of Mahamantra chanting.

**
Let us all also remember this message about Prayers performed with the Mahamantra. This New Year, let us all resolve to pray to the One God by chanting the Mahamantra and having all our problems resolved and all our wishes fulfilled.

One Response to "The Forgotten “Prayer”"