There was an illustrious devotee in Guruvayur by name Poondhaanam. He was so devoted to the Lord that Lord Guruvayurappan would converse with him everyday.

In the same town, there was a person who was afflicted with a grave disease. No medicine could cure his disease and this made him a dejected person. One day, he approached Poondhaanam and told him about his disease. He requested Poondhaanam to ask Sri Guruvayurappan if he would be cured of his disease. 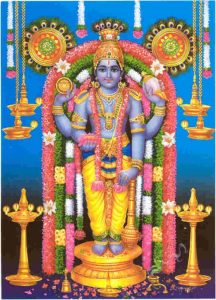 That night, when Poondhanam spoke to Lord Guruvayurappan, he asked the Lord if the person’s disease would be cured. The Lord told Poondhaanam that the disease would not be cured.

The next day Poondhaanam met the ailing person and told him what the Lord had said. No sooner did he hear about Lord’s word that he would not be cured than he burst into tears. He cried all day that even the Lord had forsaken him.

That was when the man met Kroorammai. Kroorammai was a very humble devotee of the Lord who hailed from a very poor family. Although she did not have any status in the society, she possessed a special status in Sri Guruvayurappan’s heart. Lord Guruvayurappan would talk to her regularly as He did to Poondhanam.

Kroorammai heard this person’s story and assured him that she will take his case to the Lord. The next morning, with an enthusiastic mood she came down to greet the ailing person. She said, “The Lord spoke to me. When I asked Him about you, He has asked you to chant the Divine Names, ‘Achyuta Anantha Govinda’ continuously and your disease shall be cured!’

The ailing person’s joy knew no bounds when he heard that he could be cured. He immediately caught hold of the Lord’s instruction and chanted the Names incessantly. As the Lord had predicted, eventually, he was cured.

He went to the residence of Poondhaanam and told him what had happened. He said, ‘You lied to me! Lord Guruvayurappan has indeed cured my disease!’

Poondhanam felt very sad on hearing this. He could not bear the allegation that he had lied. He wept to the Lord, “Oh! Guruvayurappa! Was it not you who had told me that he would not be cured? Today, I am being blamed of uttering falsehood. Did I really utter a lie? Is this fair?” He kept crying at the feet of the Lord.

That night, Sri Guruvayurappan spoke to Poondhanam and pacified him. He said, “It was I who told you that he will not be cured. There is no doubt about it! You had come to me and bluntly posed a question if that ailing person would be cured or not, as one would do to an astrologer and I replied to you appropriately. But what did Kroorammai do? She asked me, ‘Oh! Guruvayurappa! Today a devotee came and asked me if his disease would be cured. Lord, with your grace, is there anything that is impossible in this world? Pray tell me what he should do to be cured!’ and I told her the way!”

Children, what do we learn from this story? God definitely hears everyone of us and answers our wishes when we pray to him sincerely. So, whenever we chant the Divine Names and say our prayers, we should be careful to ask the right thing to the Lord.