Gopa Kuteeram kids from Pleasanton, CA wer being taught stories from Srimad Bhagavatham as part of their regular classes and were encouraged to draw what they learned.

Presenting below their write-up and illustration on Varaha Avatar. 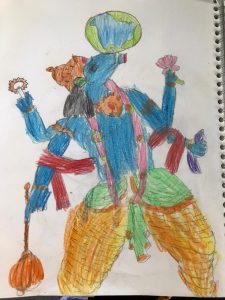 Once in Vaikuntam there were five Rishis eager to see Lord Vishnu but the gatekeepers Jaya and Vijaya wouldn’t let them in because the Lord was sleeping.

The Rishis cursed the gatekeepers that in their next birth they will be born as Asuras. Lord Vishnu woke up and asked the Rishis “what happened”? The Rishis told Lord Vishnu about the curse.Then Vishnu said, “don’t worry I will bring them back to Vaikuntam as Jaya and Vijaya”. Lord Vishnu also said that, “ everything that happened is my leela”.

They were later born as Hiranyakashipu and Hiranyaksha. Hiranyaksha was goaded with pride and arrogance. He conquered heaven and the devas. He slowly went to Lord Varuna and challenged him to battle. But Lord Varuna said “how about you go and battle Lord Vishnu?” Let us see if you can defeat him then come back. So Hiranyaksha goes to Lord Vishnu.

Meanwhile, after Mahapralaya, the God of creation, Lord Brahma created the first couple Swayambu Manu and Shatapura. Brahma said that Swayambu Manu’s purpose on earth is to worship god. But  mother earth was out of her orbit and was submerged inside the ocean. Then Brahma prayed to Lord Vishnu and then a tiny boar came from his nostril, the size of a thumb. The tiny boar became the size of a huge elephant. That boar is Varaha avatar.

All the Devas and Rishis prayed to Varaha avatar so they can get earth into the orbit.Varaha goes into the ocean uses his tusks to get to earth from Rashatala and Varaha lifted earth and put it in its orbit.While Lord Varaha was trying to put earth into orbit, Hiranyaksha came and made fun of Lord Varaha and challenged him to a battle. Lord Varaha made Mother Earth not to sink into the ocean and with His own powers fight with Hiranyaksha and killed him.

All the Devas and Rishis praised the Lord and this day is celebrated as Varaha Jayanthi on Dwadasi Day in the month of Magha.