In Srimad Ramayanam in Yuddha Kandam, Vibhishana, the half-brother of Ravana, lists out bad omens occurring in the city and advises Ravana to restore Sita to Rama. Ravana turns a deaf ear to Vibhishana and sends him away. 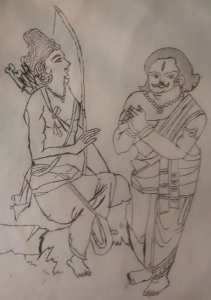 Ravana goes again to the assembly hall to consult all the ministers. Vibhishana informs the assembly about the strength of the monkeys, and about the power of Rama`s arrow. He also informs that no one on the demons’ side can withstand Rama in battle. Then Vibhishana again requests the assembly to save Ravana by giving back Sita to Rama. Indrajit criticizes Vibhishana for underestimating Ravana’s strength.

Ravana refuses to hear the words of Vibhishana and scolds him with harsh words. Vibhishana then sets off and surrenders to Rama.

Vibhishana together with four of his companions reach the place where Rama is halting. Hovering in the sky itself, Vibhishana asks Rama to give refuge to him. Sugriva tells Rama that he cannot trust Vibhishana, the demon. Then Rama asks for the opinion of the leaders in his group. All of them express their doubts to accept Vibhishana. But Hanuman says that Vibhishana need not be doubted because he thinks that Vibhishana understands the great qualities in Rama and demerits in Ravana.

Hearing Hanuman’s words, Rama says that He cannot desert Vibhishana who is seeking refuge in Him. Initially Sugriva disagrees with Rama’s opinion. But when Rama explains the different circumstances under which Vibhishana is acceptable, Sugriva also agrees with that view. Finally Lord Sri Rama says –

“Do you even have to say, ‘Oh Rama, I am yours!’? Just by calling out ‘RAMA’ is it not enough? You have become mine. I take you unto Me and remove all your fears! And this is my vow!”

Another  beautiful point here is that although there was a discussion whether to accept Vibhishana or not, the other four demons who came along with Vibhishana were accepted automatically without any further questions. This was because they were with Vibhishana! So as long as we are under the shadow of a sadhu (saint), the Lord accepts us instantly. This is the greatness of sadhu sanga.

One Response to "Vibhishana Sharanagathi"