There was once a great king called Bharata. He was a very righteous king, and ruled for many years. The land (now called India) got the name of ‘Bhaarata varsha’ because of this King Bharata. When King Bharata became old, he renounced his throne and retired to the forests to do sadhana (spiritual practice) to attain Bhagavan.

In the forests, he would meditate on the Lord and he developed great love for Him. One day, as he was meditating by the river, a pregnant deer was drinking water. Suddenly a lion roared. The frightened deer tried to jump across the river to escape. But as she tried to jump in fear, she gave birth to a fawn, and died. The fawn fell into the water and immediately, Bharata went to rescue the young fawn. He brought it back to his cottage and took care of it. The fawn thrived under the care of Bharata, who loved it very much, and grew into a beautiful deer.

Over time, Bharata got so attached to this young deer that he lost focus on what he had come to the forest for. Instead of meditating on Bhagavan and praying to Him, he spent all his time taking care of the deer, playing with it and worrying about it. One day, the playful deer found a herd that it liked. The deer left Bharata and went away with the herd. Bharata was devastated. He spent every moment thinking of the deer and doting on the times when it was around. The day when death came knocking on Bharata’s doorstep finally arrived. Bharata could not think of anything but his deer. He couldn’t remember that the purpose of life was to think and chant the name of Bhagavan, and instead, he died thinking of his deer.

As a result, he was born as a deer in his next birth. Krishna says in Bhagavad Gita that the prayer and sadhana that one does never goes waste. Bharata was born as a deer but was attracted to a sage’s ashram. It never went with a herd, but stayed aloof in the vicinity of the ashram. It knew not to get attached to its senses. Bharata as the deer grew old and completed his life.

In the next life Bharata was born as the last son of a brahmin. By Krishna’s grace, he remembered his previous lives and his follies, and how he had lost the opportunity to attain Bhagavan. He realized that he should stay completely unattached to anyone. Remembering this, he never spoke to anyone but remained as though he was dumb and dull. He grew up to be a strong man but would not speak to anyone. He was a jivanmukta (one who was self-realized even while living). But unfortunately, others thought he was insane and inert (jadam). Hence the name Jadabharata.

After his father passed away, his brothers took the wealth and split it rather unfairly. They left Jadabharata with nothing and split the rest among themselves. Jadabharata didn’t care; his only goal was to attain Bhagavan. 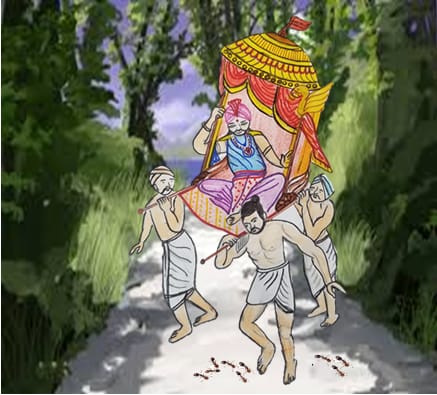 One day, Jadabharata was sitting under a tree, and unexpectedly a king, Rahugana, passed by. Rahugana was riding a palanquin. One of the servants who was carrying the palanquin fell sick. The party was looking for a replacement so they could continue the journey. They found Jadabharata sitting under a tree and ordered him to replace the sick man. Bharata didn’t say a word and just did as they said. They were now on their way to see Sage Kapila, from whom Rahugana wanted to receive spiritual lessons.

As they were traveling, Bharata’s eyes fell on a trail of ants crossing through the path. To avoid stepping on them, Jadabharata jumped up and around the ants. The movement shook the palanquin and made king’s head bump on the palanquin. The furious king looked out and demanded to know what was happening. The workers pointed their fingers at Jadabharata, blaming him for the discomfort Rahugana had experienced.

King Rahuguna was enraged and gave Jadabharata a piece of his mind. He said sarcastically, “What a pity, it looks like you’ve carried me all by yourself, and you are very tired. Maybe this is because of how thin you are, or because of how old you are.”

He meant to belittle Jadabharata since he looked strong and healthy. Jadabharata did not react.

About a minute later, the same incident occurred. Once again the king got out, but this time he was thoroughly outraged. He rudely yelled at Jadabharata and decided to punish him for disturbing his travels. He told him he would punish him just as Yama dharmaraja punishes those who commit sins.

Now Jadabharata broke his silence and spoke for the first time ever. He said calmly, “O king, what you previously said about my body is true. But your remarks do not apply to me since my body and I are not the same. O king, you see my physical body, not the spirit within. You address me by ‘You’. What do you mean by that? Do you mean my arms, legs, my body? No, you are calling my spirit, and that cannot be hurt or tired. Only when the servant-master relationship is fixed and established, the servant should do exactly as the master says. But we never know if in the future your position will change. Who is the master and who is the servant here? Concepts such as strong, weak, and grief, apply only to those who call themselves as the body. ‘I’ am the Atma, the ever-existing reality. ‘You’ are not your body; instead, you are your soul.”

These words struck the king like lightning. He knew immediately that this was not a normal human being. He stepped down from the palanquin and fell at the feet of Jadabharata. The king asked for forgiveness for talking to Jadabharata in such a rude manner. He asked him for the spiritual upadesa (spiritual advice) that he was seeking.

“O great soul, please forgive me. I spoke ignorantly, not knowing who you were. I am amazed at your spiritual knowledge! Please tell me how I can attain jnana. Should I renounce my kingdom? My wealth? My family? Should I go and do tapas in the forest?”

Jadabharata gave him upadesa and spoke of the path of devotion. Then he said, “The best sadhana is to bath oneself with the dust from the foot of a Jnani!”