“Drink the sweet nectar of the Name of God,” urges every one of the great devotee composers of India. The significance of the Name is beyond the conceivable limits of a human mind. Likewise, these saints also point to us that the sweetness of Name is also equally inconceivable. 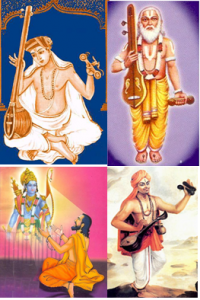 The great Mahans had Nama integrated so intricately into their daily life, that it was no different to them than their daily pursuits. We may ask, “Eating and sleeping are essential for living, since eating gives us energy and sleeping gives rest, and these are key factors towards a healthy lifestyle. What essentials does Nama bestow us with, to qualify as an integral aspect of our daily life?”

Sri Thyagaraja very mellifluously answers this question in his krithi “RAma kathA sudha rasa pAnamoka rAjyamu jEsunE.” (to drink the nectar of Rama’s stories and Name is equal to ruling a kingdom). Sri Thyagaraja goes on to say in this Kirtan that Nama bestows the fruits of all the purusharthas (pursuits of human life—namely dharma or righteousness, artha or wealth, kama or desire, moksha or Liberation); that it is the verily abode of courage, bliss and comfort; that it is the boat that rescues all of us from the deadly ocean of Samsara; and finally, that it is the destroyer of all ills of Kali.

(Chanting the name of Sri Hari bestows the nectar of happiness. It bestows beneficial tastes. Is this not enough for you?)

Sri Purandara Dasa shares with us his blissful experience of sweetness of drinking the nectar of Nama – “RAma nAma pAyasake Krishna nAma sakkare, viTTHala nAma thuppava kalasi bAya chapparisirO.” (Mix the sweet payasam of Rama’s name with the sugar of Krishna ‘s name and ghee of Vittala’s name and relish the tasty combination with your tongue.)

Another flavor of Nama is shared with us by Bhadrachala Ramadasar. Bhadrachala Ramadasar was imprisoned for 12 years for using the Nawab’s revenues towards the reconstruction of  a temple for Sri Rama at Bhadrachalam. But despite his suffering, he remained in a state of complete surrender to Lord Rama, referring to him as “Deenadayalo” (the great compassionate One). In these 12 years, he composed some of the finest krithis and poetic verses praising Rama Nama, which are collectively known as Dasaradhi Shatakam. Even while suffering in prison, he sings, “O RAma nee nAmam Emi ruchirA,  shrI rAma nee nAmam entha ruchirA…Rama..” (O Rama, how sweet is Your Name, what sweetness It has!” In the stanzas of this song, the great saint compares Rama Nama to delicacies that we relish, like Madhu rasam, butter, curds, grapes, dates and others; he also speaks about how the “tasty” Name is  one that is enjoyed and constantly chanted by those such as Hanuman and Shiva; one that guarded bhaktas such as Gajendra, Prahalda and Vibhishana; and one that is sung by divine musicians such as Narada and Tumburu.

Our own Guru Maharaj, HH Sri Sri Muralidhara Swamiji also sings the same in his kirtan, “Radhe Radhe endraal thithikkuthey naaku…” (When I chant the name of Radhe, how sweet my tongue tastes!)

This description of the Name as being “tasty” by saints is common across all eras, languages and geographic regions. It truly makes us wonder that perhaps there is some truth to this statement that has been reiterated time and again by saints down the ages.

But it often happens that even after hearing and reading mounds about the power and sweetness of Nama, many of us wonder how to inculcate Nama into our daily lives. Either we worry about any fallacies we may commit while chanting or we are perplexed by opinions of people around us. Sri Muralidhara Swamiji answers this concern very strikingly by referring to Oothukadu Venkata Kavi’s krithi,

(Though you have taken several thousands of births, and even if you give thousands of coins, would this chance ever come again? Hence, no matter what anyone says, fear not and sing the praise of Lord Krishna.)

“Discarding the fruit, after peeling the rind, didn’t a devotee offer him just the rind? (Vidura) A fistful of flattened rice, didn’t the all-knowing one Eagerly receive it from the one who offered it? (Sudama) After bearing the penance of ripening didn’t (she) further test and taste them before offered it to him? (Sabari) – This world might say a myriad things but we should respond with “Why should I care!”, Recite his thousand names and sing the praise of Lord Krishna!.”

Thus the beauty and bliss of Nama is one that transcends the boundaries of rules, apprehensions and doubts. Let us all therefore, relish the nectar of Nama by following the footsteps of these mahatmas like Andal, who appeal to us,

(You will be freed of all your obstacles just by reciting His Divine Names, having your thoughts always filled by Him and offering flowers at His lotus feet. By doing these simple deeds, all your past as well as future sins will be burnt to ashes in the fire [of the Divine Name])