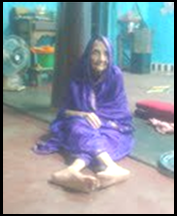 In Kali Yuga, innumerable devotees of Lord Narayana will incarnate in the southern part of India known as Dravida desha, on the banks of various rivers like Tamirabharani, Kruthamala, Payasvini, Kaveri, Mahanadhi, etc.

As predicted in Srimad Bhagavatam, Kali Yuga has indeed seen the birth of countless devotees of the Lord right from the Azhwars. Ammalu Ammal was one such great devotee who lived (almost incognito) among us!

Ammalu Ammal was born, in Kumbakonam-Tamil Nadu, to a pious Kannada speaking Madhwa couple in the year 1906. Girls, in those times, were married when they were quite young. Similarly, Ammalu Ammal too was married at a very tender age. And, within a very short time, she lost her husband. Her own family and community started considering her inauspicious from then on and tormented her by words and deeds. Driven to despair, she attempted suicide. The compassionate Lord Narasimha came in her vision and forbade her from killing herself. Instead He commanded her to sing His praises and glories. Further, He promised her that her basic necessities of food and clothing would always be taken care of. This incident reminds us of a similar incident in Bhakta Meera’s life. Meera too, was driven to despair by society preventing her from singing her Lord Krishna, and attempted to take her life. However, the Lord appeared before her and prevented her from doing so.

From that day onwards, Ammalu Ammal felt no hunger and partook only a glass of curd/milk and fruit every day for the rest of her life. And she would forgo even that on Ekadasi. However she would cook grand varieties of food for the Lord.

Ammalu Ammal immersed herself completely in devotion and sang and danced for the Lord in ecstasy. Divine compositions started pouring out from her. Till date, she has composed tens of thousands of songs. And she is also said to be an avatara of Sri Purandara Dasa.

Once Lord Panduranga commanded her to come to Pandharpur. She started to Pandharpur the very next day and spent several years lovingly serving the Lord. When she finally came back to her hometown, she brought back a small Panduranga idol from Pandharpur and lovingly continued her service to the Lord for the rest of her life.

Kanchi Maha Periyava had great regard for Ammalu Ammal and always spoke highly of her. Once a rich man who had an unmarried daughter approached him to seek his blessings. Instead of blessing him, Kanchi Periyava asked him to go seek the blessings of the “Nityopavasi” (one who fasts everyday) living under the tree. Only then did people, even of her own community, come to know about the greatness of Ammalu Ammal.

She spent the latter part of her years mostly in her hometown, Kumbakonam. She would spend the whole day worshipping her Panduranga – waking Him up, giving Hm a bath, meticulously dressing Him, cooking for Him and constantly singing His praises, even at her advanced age.

Her beautiful songs are sung even today by her followers and often also in GOD satsangs.