Yearn for the Lord… the Guru will Come!

Sant Kabir Das is a great Mahan who lived in north India only a few hundred years ago. He is famous for his dohas – simple 2-line poems that convey very profound spiritual concepts. In his dohas, Kabir Das sings the praises of Guru, devotion to God, the greatness of the company of Sadhus, dispassion and so on.

There are no clear records about Kabir’s birth. But soon after he was born, he was found and adopted by a Muslim couple. He grew up in a Muslim weaver community in the holy town of Kasi, but he found his mind being drawn towards Lord Rama. 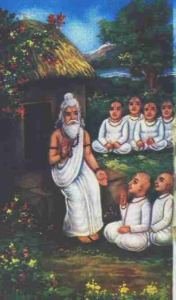 The fire of dispassion raged deeply in his heart.  Once he happened to see a woman grinding some seeds, and he lamented,

Looking at the grinding mills, Kabir feels like crying. Caught between the two stones, no seed (life) is spared.

As he cried, a sadhu came up to him and consoled him saying that just like the seeds that were attached to the stone were not crushed, people who got caught hold of Lord Rama’s Name will be saved. So Kabir longed to be initiated into the Holy Name by a Guru. With this longing in his heart, he approached the gates of Sant Ramananda’s ashram. But the saint’s disciples denied him audience with the Guru and drove him away as he was a Muslim. He cried all day in front of the saint’s ashram, but to no avail.

Crestfallen, he finally went to the banks of Ganges and sat on the steps and wept uncontrollably. Exhausted, he fell asleep on the steps. That night Lord Rama and Lakshmana, the puja murthis of Sant Ramananda appeared in his dream and the saint heard them talking among themselves. Rama told Lakshmana, “Come Lakshmana, let us go away from here. We should not stay in a place where a bhagavata is not respected!” Waking up from this dream, Sant Ramananda was very perturbed. He worried about what mistake he had committed and who was the bhagavata (true devotee) who he had disrespected.

Early that morning, as he was on the way to the Ganges for his morning abluti 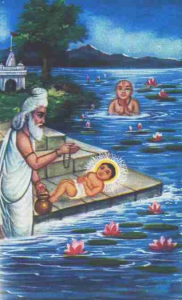 ons, Sant Ramananda continued to muse over his dream. Walking absent-mindedly in the pre-dawn darkness, he stepped on sleeping Kabir. As his feet struck Kabir’s head, he uttered “Ram, Ram.” Kabir woke up, and seeing that it was none other than his Guru whose Paduka had blessed his head and from whose lips he had heard the Divine Name. He immediately prostrated to Ramananda. Sant Ramananda accepted him as his disciple. From then on, Kabir always chanted the Lord’s name.

Getting a Sath Guru is equal to attaining everything in this world.
Whereas, every house has mother, father, son and relatives so there is nothing special about it.

Sant Kabir’s jayanti falls in the month of June. Let us remember him on his birthday and pray to him to fill our lives with the names of the Lord and with Guru bhakti.