Srimad Bhagavatam is an incredible grantha. When we have a little shraddha, openness, interest, and a lot of Guru’s grace, Bhagavatam reveals its amazing beauty to us. It is deep, profound, nectarine, and simply has everything in it. This one grantha is enough for us for life!

Here is an example of one of the numerous wonderful, intricate points presented in Bhagavatam. 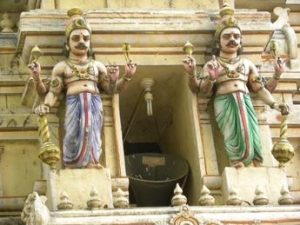 This doesn’t seem to make sense at first. But there is a scripture in our Sanatana Dharma called Pinda shastra that speaks in detail about pregnancies, childbirth, etc. This shastra clearly says that when twins are born (natural birth), the one who comes out of the mother’s womb first is the younger one, while the one who comes out later is the elder one because it was conceived first. Hence, Srimad Bhagavatam says that Hiranyakashipu was the elder son of Kashyapa, but that Diti gave birth to Hiranyaksha first!

Now Srimad Bhagavatam goes deeper and amazes us even more.

In general, if we notice in the world, the first thing that is obvious outwardly is the mine-ness. A person’s ego is clear when we try to take something that belongs to him… “Hey, this is my spot!”, “That is my idea.” So it is the mine-ness that comes out first.

The mine-ness is fueled by I-ness. The feeling that ‘I am the doer’. That it belongs to ‘me’. Mine-ness needs a very strong I-ness to sustain it. A strongly egoistic person will also have a strong notion towards mine-ness. So I-ness is like the elder brother of mine-ness. However, the I-ness is not very apparent initially, and it is mine-ness that is exposed first to the world.

And continue to see the beauty in Srimad Bhagavatam here. What does Varaha Bhagavan, the divine boar, stand for? He stands for sacrifice. So how do we deal with mine-ness? Through sacrifice.

During yagnas (fire sacrifices) when they chant “vishNavE swAhA-a idam vishNave idan na mama”, it means, “Let this gift of mine reach Vishnu. This is Vishnu’s. It is not mine.” All the wonderful Vedic rites have such subtle spiritual truths in them.

Only through sacrifice, only by offering wholeheartedly all that is ours to our beloved Bhagavan, can we conquer mine-ness. The greatest of all sacrifices (tyAgA) is sacrificing the sense of I and mine.

So once mine-ness was taken care of by sacrifice, i.e. Varaha Bhagavan, what was left? The Ego. I-ness. Hiranyakashipu.

When Hiranyaksha was killed, Hiranyakashipu understood that he had to strengthen himself with tapas (penance). When there is ego there will be only rajasic tapas. Very gory penance. And Hiranyakashipu performed a gory and harsh penance. Brahma came to him. Vishnu will never come where there is I-ness. Where there is ego, the highest level that one can reach is only Brahma, who stands for epitome of intelligence. That’s the highest that an egoistic person can go. They cannot transcend the intellectual barrier into the realm of pure divine experience.

An egoistic person also tends to be judgmental. They see the world in terms of black or white. They cannot accept things as they are. They consider those around them as either being on their side or not. An ‘I-person’ or an egoistic person is generally an ‘OR’ person. They know only this OR that. They understand only extremes. A saint or a humble person, on the other hand, will be an ‘AND’ person. Harmony is AND-ness. Conflict is OR-ness.

So when Brahma came, Hiranyakashipu, who knew only ‘OR’, asked for a boon along those same black and white lines. He said, “I should not die at the hands of a man OR an animal, inside OR outside, in the day OR at night…”.

And the only way to take out the I-ness (OR-ness) is by bringing in harmony in form of AND. So Bhagavan destroyed Hiranyakashipu by becoming a man AND a lion. By keeping him both inside AND outside. By using a weapon (nails) that was both living AND non-living. At a time that was both day AND night.

This is the beauty of Srimad Bhagavatam that reveals such magnificent truths through every one of its stories, slokas, and words.