When we listen to Mahans speak, and delve a little deeper into Srimad Bhagavatam, that is when we truly begin to appreciate the heart of many wonderful personalities from our Itihasas and Puranas, which can show them in a light very different from general perception. In this new monthly series in our newsletter, we shall take a look, one by one, at these ‘hidden’ bhagavatas of Srimad Bhagavatam. 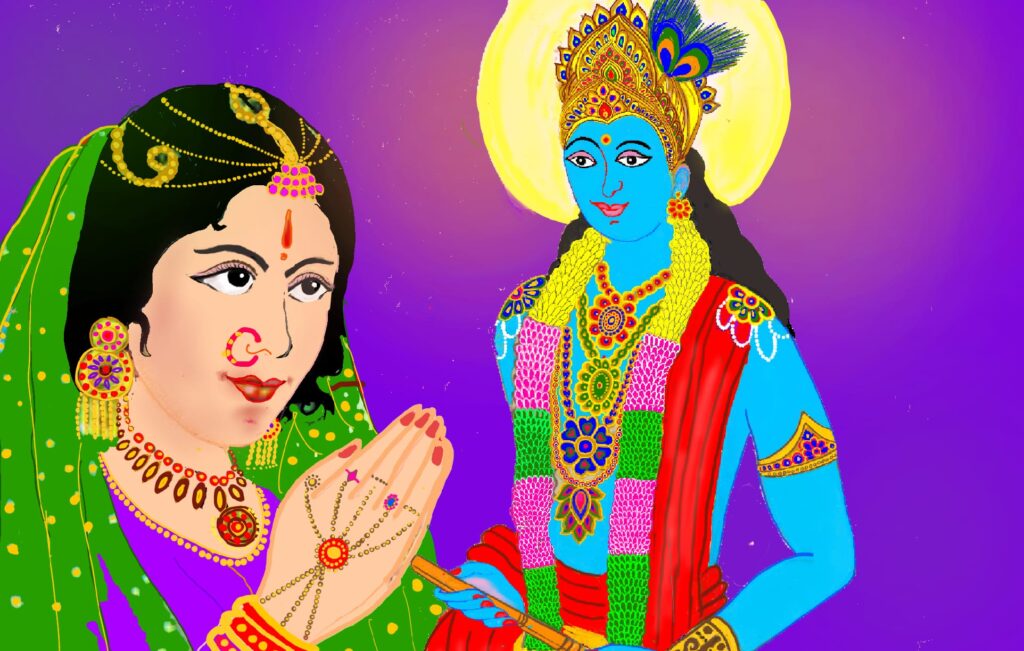 Draupadi is known, for the most part, as a fiery personality. Just as she emerged from the fire, she was a beautiful warrior princess worthy of her five warrior husbands. She laughed at Duryodhana’s blunders, faced all her string of troubles and travails bravely, underwent the terrible ignominy of her great dishonor seething with rage, and wanted Dushasana’s blood in revenge.

But Draupadi was also a great devotee of Bhagavan at heart. We catch a glimpse of Draupadi’s devotion and faith in Sri Krishna in the episode of the Akshaya patra during the Pandavas’ exile, and again, most importantly, when she cried out and took refuge entirely in Bhagavan and His Name, when all else failed in that depraved court.

Sri Swamiji says that this seemingly simple act of Draupadi – of calling out Bhagavan’s Name ‘Govinda’ – touched Bhagavan so much that He felt beholden to the entire Pandava family because of just that! It is this act of surrender of Draupadi, and Bhagavan’s grace on her that is sung of again and again by all mahatmas.

In connection with this episode, Sri Swamiji also spoke recently about a wonderful perspective, where he pointed out the true philosophical essence of Mahabharata. He said that in the Mahabharata, Duryodhana was an incarnation of the dark age of Kali. And Draupadi, who emerged from the fire (which is the means through which deities appear, as seen in the way offerings are made to deities through yagas and homas through agni), represented Divinity (the Deity) itself. Now in the Mahabharata we  see that ‘Kali’ brings ‘Divinity’ under its control. The Divinity turns to ‘Dharma’ and other ‘safe keepers’ of Divinity, but it is all in vain because none of them can save Divinity in the depraved Kali Yuga. Finally Divinity itself shows the way out by calling out Bhagavan’s name and taking refuge in His Name, which is what then subdues Kali and restores the honor of Divinity itself. Narrating this philosophical angle, Sri Swamiji concluded categorically, “So what does this show? That in Kali Yuga, Deities (Divinity) themselves can be saved only by Bhagavan Nama! This is the true essence of Mahabharata, showing the greatness of Namasankirtan in this Age!”

Srimad Bhagavatam was compiled specifically for us, the people who live in Kali Yuga. It was brought forth to show the path of namasankirtan and to show the gunas or wonderful qualities of Bhagavan and His devotees, so that devotion to Him can be kindled in our hearts also.

No wonder then that Bhagavatam emphasizes primarily on the superior inner qualities of the devotees. In the case of Draupadi, Bhagavatam also shows her  greatness through another episode that reveals her to be indeed a worthy, devoted sister of Bhagavan Sri Krishna and a great vaishnava at heart.

Srimad Bhagavatam begins where Mahabharata ends, at the end of the great Kurukshetra war, with the desolate scene of the aftermath of war. Thousands and thousands of warriors, soldiers, horses, elephants had died. Chariots, weapons and corpses lay strewn everywhere on the battlefield. Womenfolk wailed, having lost their husbands, sons, fathers and brothers.

The few survivors of the war were exhausted both physically and mentally, seeing their kith and kin and entire armies fallen. Draupadi too was emotionally drained and exhausted, in the Pandava camp. But she thought the war was done and her travails were over. Her five husbands and five sons had survived.

But then, imagine her horror when, the next morning, she found all five of her sons lying dead! Their heads had been cut off, in a cowardly act, while they were asleep. Draupadi was engulfed with grief and was completely inconsolable.

The Pandavas were enraged. Arjuna vowed to avenge the act and bring the perpetrator to Draupadi. He set off with Lord Krishna to find the murderer. Finally, finding that it was Ashwatthama, they cornered him, warded off the brahmastra discharged rashly in fear, and subdued him. They brought him to their war camp, and threw him disdainfully at Draupadi’s feet.

This man had mercilessly killed Draupadi’s five sleeping sons. How a mother’s heart would bleed! Would she not want revenge for this dastardly act? And that too, this was Draupadi, the fiery queen.

But here is where Srimad Bhagavatam shows Draupadi in an entirely different light. It reveals her heart, the heart of a devotee, of Sri Krishna’s worthy sister, of a Vaishnava.

“Vaishnava janato tene kahiye je, peed paraayi jaane re” sings the mahan Narsi Mehta in his beautiful song where he lists the qualities of a true Vaishnava.

He says, “One who is a Vaishnava knows the pain of others,
Is only compassionate and serves others, without letting pride enter his mind…”

Here Draupadi, when she looked up and saw that the man who had killed her sons was none other than Ashwatthama, she saw  him, not as a murderer, but as the son of their Guru Dronacharya, and as the son of another mother, Kripi. Instead of bleeding for her sons, her heart bled for Kripi’s plight if she in turn lost her only son Ashwatthama! What a noble thought on the part of a mother drowned in grief; who had faced wave after wave of troubles all her life from these very enemies!

To the utter surprise of her entire family, Draupadi fell at Ashwatthama’s feet and asked Arjuna to spare him. She said she did not wish for another mother to undergo the deep suffering that she herself was  going through right then through the loss of her sons.

Needless to say, Draupadi’s reaction filled Bhagavan Sri Krishna’s heart with happiness and immense compassion towards this devotee, whom He considered His dear sister.

What a great lady Draupadi was! And it is indeed only Bhagavatam that can reveal the heart of this devotee the way it does.

Click here to go back to the April 2022 newsletter page:
https://godivinity.org/newsletters/nama-dwaar-newsletter-march-2022/