When we listen to Mahans speak and delve a little deeper into Srimad Bhagavatam, only then do we truly begin to appreciate the heart of many wonderful personalities from our scriptures. This can show them in a light very different from general perception. In this new monthly series in our newsletter, we shall take a look, one by one, at these ‘hidden’ bhagavatas of Srimad Bhagavatam. 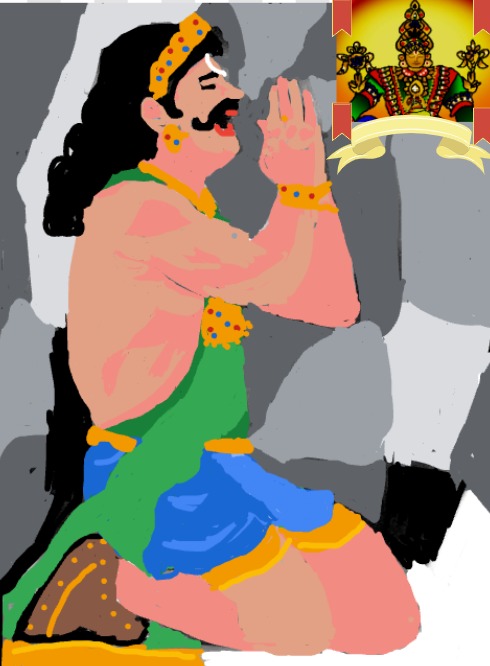 Indra and Vritrasura’s thunderous battle is considered legendary. In many places in our scriptures, it is presented as an example of Indra’s heroic triumph over a gruesome and savage asura. Srimad Bhagavatam, however, reveals the true story behind this battle. What’s more, it also reveals the sweet, soft, melting heart of this asura with a giant, terrifying body.

Vritrasura was brought forth from a yagna by Twashta because of Indra’s atrocious act of killing his own guru Vishwarupa, who was Twashta’s son. As Vritrasura, who was born to fight Indra, advanced upon him and began to overpower him, Indra sought refuge in Bhagavan to save his life. Bhagavan advised him to make a special weapon, the Vajrayudha, with Sage Dadhichi’s penance-laden backbone, to kill Vritrasura. Doing accordingly, Indra, now armed with the invincible weapon obtained purely through the blessing of Bhagavan and the benevolence of Sage Dadhichi, marched forward to face Vritra. A terrible battle ensued between the Devas and Asuras.

At one point, all the asuras fled the battlefield and left Vritrasura fighting alone. Vritra stood his ground bravely, continuing to wreak havoc on the Devas and welcoming death on the battlefield as divine martyrdom. Up until then, we only see Vritra as a dauntless warrior at best; that is, until he turned his mind to Bhagavan and opened his mouth to utter the most beautiful four verses of prayer. A prayer that is hidden deep within Srimad Bhagavatam just as it was hidden deep inside the heart of Vritra until that moment; a prayer hailed by great mahatmas to this day, and which could be uttered only by one whose heart is filled with nothing but immense love for his beloved Lord; a prayer that shows us what is indeed our dharma, artha, kama and moksha in the path of Bhagavata Dharma.

Here, by asking for a life of divine service to Bhagavan’s devotees, the prayer shows us how this is indeed our dharma in this path.

This prayer shows us how our wealth (artha) is indeed only Bhagavan, and nothing else.

This verse reveals the true heart of Vritrasura, where he appears to struggle initially to perfectly express his inexpressible divine love. He speaks of it in three stages and finally hits upon the most beautiful and apt example of a wife yearning to be with her beloved husband. Unlike the chick, the wife is not weak and helpless. She also knows she has the power to go to him if she chooses to, unlike the calf.  Neither does she need or expect any nourishment or anything else from him, like both the chick and the calf. All she yearns for is his loving presence and willingly chooses to wait for him to come of his own accord. This is the highest state of premabhakti of none other than the Gopis themselves. That this outwardly ‘terrible’ Asura is inwardly in that highest state of prema is indeed a thing of wonder that is revealed only by Srimad Bhagavatam.

This verse also shows that the highest desire (kama) is indeed desiring for the Lord Himself.

“O Bhagavan, please bless me always with the company of Your devotees (sadhu sanga), and please do not ever give me association with those who are attached to the world and its bonds.”

This final verse shows the way for moksha, which is nothing but freedom from samsara or dussanga. This freedom can be found only in sadhu sanga (company of mahatmas and true devotees).

This is the real ‘bhagavata Vritrasura’ that Srimad Bhagavatam shows us. It also tells us how he was blessed with this divine premabhakti. In his previous birth as the king Chitraketu, he suffered terribly, first due to his desire to have a child, and later, on losing his child. But through the grace of Sage Angirasa and Sage Narada, he was blessed with vairagya and had darshan of Bhagavan in the form of Lord Sankarshana and developed true Hari bhakti in his heart. He became a Vidyadhara and roamed all around the worlds singing Bhagavan’s praises. Yet, because he had not had sadhu sanga, he did not have humility or prema and committed a mistake by teasing Lord Shiva in Kailasa. Jagatguru Lord Shiva simply laughed and did not consider Chitraketu’s words as a transgression, seeing only the Hari bhakti in his heart. However, Parvati Devi was enraged and cursed Chitraketu to become an asura. Chitraketu bowed to the Mother, accepted the curse, and went away. Lord Shiva praised Chitraketu to Parvati Devi, saying how Hari bhaktas like him do not care what body they are born in, as long as their bhakti remains untainted.

Mahans interpret beautifully that all of this was orchestrated by Bhagavan so that He could take His dear bhakta unto Himself. In the incident in Kailasa, Mother Parvati removed Chitraketu’s sin of ‘apachaara’ by cursing him so that the sin would be expended away, and Jagatguru Lord Shiva also blessed Chitraketu with premabhakti with His divine glance (as it is only the Guru who can bestow prema). Thus cleansed of his offence and filled with immense premabhakti, Vritrasura was finally slain by Indra with the Vajrayudha. This was also part of Bhagavan’s plan. Giving up his body, Vritrasura then attained his beloved Lord, which was indeed his deepest desire.