All Knowledge Finally Converges at the Feet of the Sadguru!

February 18: the world was blessed twice on this date with the birth of great Masters! First in 1486 when Sri Chaitanya Mahaprabhu was born, and 350 years later, in 1836 when Sri Ramakrishna Paramahamsa was born! 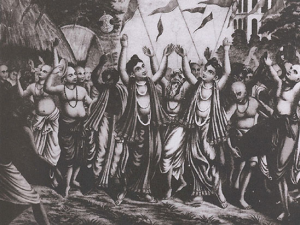 Chaitanya Mahaprabhu was an ocean of wisdom; a Vedic scholar par excellence. He was an expert in all shastras; was crowned as the most learned scholar ever; and everyone feared facing him in a debate. But one fine day, such a great scholar threw everything away and declared that simply chanting God’s Name would suffice. After that, he himself constantly chanted ‘Hare Krishna Hare Rama’ and reveled in love of God.

He had studied and mastered everything and was highly knowledgeable. But he realized that none of that was going to have any impact on the ultimate goal of life. The whole point and purpose of all the shastras, all scholarship and knowledge was to finally take us to God’s Feet. Else such study is but in vain. That is what he wanted to show us.

Though he was a highly learned scholar he did not leave behind any philosophical texts. His only ‘work’ that exists today is the beautiful Sikshashtakam that sings the glory of Krishna Nama and Krishna prema. Even this, it is said, was not composed by Sri Mahaprabhu as an ‘ashtakam’, but was organized and compiled by his disciples with the nectarine pearls of slokas that came out of him now and then when he was steeped in divine communion.

Many disciples of Mahaprabhu were also highly learned scholars. The list includes Advaitacharya, Vasudeva Sarvabhouma, Srivasa Pandit, Murari Gupta, Sanatana Goswami, Rupa Goswami and numerous others. They were all lions in their domains. One of them was the greatest Tarka vidwan in the country in his time; another was the greatest Vedanta vidwan of his time. Many of them even had their own disciples. But every one of them surrendered to Mahaprabhu. They all of them threw up their hands and declared “all this learning is of no use if the Lord’s Name does not dance on my tongue!” Giving up everything, they chanted Nama blissfully. So, all the shastras converged at Mahaprabhu’s feet. 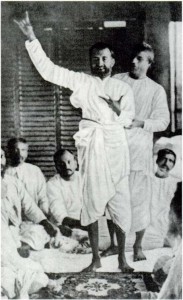 Sri Ramakrishna Paramahamsa too exhorted his disciples to chant the Divine Name and showed them that love of God was the purpose of life. But in outer circumstances, he was the exact opposite of Sri Chaitanya Mahaprabhu. He could barely even write his own name! He was uneducated.

But take a look at the list of his disciples –Swami Vivekananda, Swami Brahmananda, Swami Saradananda, Swami Ramakrishnananda, Keshab Chandra Sen (the leader of Brahmo Samaj), Surendranath Mitra, Girish Chandra Ghosh (the father of Bengali theater) and many others.

They were all highly educated. They were the cream of modern intellectuals of India. They knew all about modern sciences. They were erudite scholars of their times! They knew literature, science and arts. And every one of them was surrendered to their divine Master. All that worldly knowledge came and converged at the feet of Sri Ramakrishna Paramahamsa!

It is indeed a great contrast! All scriptures at the feet of Sri Chaitanya Mahaprabhu and all modern day education at the feet of Sri Ramakrishna Paramahamsa! And what did both of them teach? Simply love for God and the greatness of His Divine Names.